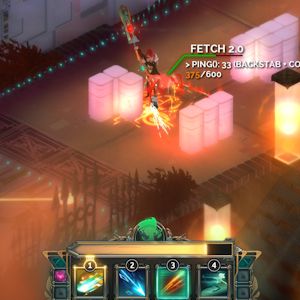 Supergiant Games is a master of the aesthetic. As far as I'm concerned, Bastion was an okay game, a decent little title that consisted mostly of recycled ideas and possessed of a quality found in most browser-based free-to-play games. However, it brought with it an art style and soundtrack so effectively beautiful, it successfully passed itself off as something much more. It became a critical darling, and I'm convinced to this day that such a feat was accomplished through skilled use of sensory manipulation and sheer force of presentation.

The studio's latest production, Transistor, continues the trend of placing style over substance to the point of obfuscation. Its weird story is convoluted and relies too much on vague referencing to appear "deep" and meaningful, but nonetheless hides behind an incredible soundtrack to sell its ideas more effectively. On a basic level, it's hard not to be suckered in by it, either. It's helped by some incredibly vocal performances, especially with regards to the titular Transistor, a "living" sword wielded by protagonist Red, whose melancholy delivery evokes the overwhelming sense of sadness that permeates Transistor supremely well.

Indeed, this is a depressing little game. Our game opens with Red standing over a corpse with the aforementioned sword rammed through its chest, her beautiful singing voice having just been robbed by an organization known as The Camerata. This group has unleashed The Process - a collective of robot-like entities that proceed to take over Cloudbank City in their hunt for Red and the sword. Also, the sword can absorb the consciousness of dead people, because it might as well.

As critical as I may sound of Transistor's story, I actually quite like it, in an odd way. It uses trickery to appear more complex than it is, as Bastion's did, but its cast of characters and the subtle twists throughout the tale are at the very least intriguing, and there's no arguing that a stylish presentation can sell even the worst ideas. The sense of sadness that lingers over the whole narrative is palpable, and the game's eventual ending is, I have to say, beautifully done.