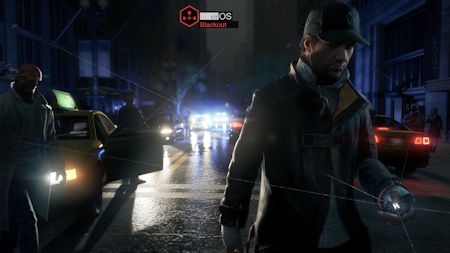 Watch Dogs holds up the non-hacking end impressively, too. Whether one chooses to sneak around under blacked out darkness, or take it to the thugs with assault rifles and grenade launchers, both stealth and combat are as flowing and quick-paced as the digital tomfoolery. Snapping into cover, taking down criminals quietly, and causing gigantic explosions feel quick and painless to grasp, though Aiden's fragility and the need for spatial awareness means that combat isn't always going to be easy for all its convenience. Watch Dogs strikes a nice balance between ease-of-use and challenge, something that's quite difficult to pull off.

Cars handle well on the road, and cruising around while continuing to hack the outside world is pretty enjoyable. Car chases often feel exhilarating thanks to the ability to not only take out cars, but turn off the engine and sink into your seat to fool pursuers. The vehicular stealth is limited, but rewarding, as is tearing around town to avoid the ctOS scanners that cover the maps when the police are trying to find you.

There is an absolute ton of content to chew through. If I were to use any single word to describe this entire game, it would have to be "dense." The amount of stuff to do is near overwhelming, ranging from simple things like checking-in to hotspots like FourSquare or apprehending thugs, to undertaking side missions and clearing out gang hideouts, there's so much to do that I actually wasted an entire day of review ignoring the campaign and undertaking Fixer missions. Missions have scads of variety, too - from distracting cops to chasing down criminal convoys to stealing and relocating cars within a time limit.

Some of the distractions border on the utterly ludicrous. Various "ARG" experiences allow Aiden to partake in parkour races or summon digital aliens to blast with a laser pistol, and there are men in alleys selling "digital trips" - hallucinogenic experiences that see players bouncing on flowers or taking on robots in a desolate, darkened landscape. Impressively, Watch Dogs is filled with optional gameplay that a player could miss entirely, leading to a wealth of variety that should stop almost anybody being bored.

Then there are the little touches. It was hours into the game before I found a random crime being committed - not as part of an official mission (for there are specific crime prevention ones), it just happened in the street and I could take the perpetrator out in exchange for reputation points. As you hack phones, you may get to download new music to play while driving. There are ways to hack into peoples' homes and pry into private lives - getting to see totally inconsequential cutscenes that range from funny to downright dark. Just for the hell of it, you can hack singing plastic bass decorations, joke-telling moose heads, and BAAAAWing Rabbid dolls, too. Because why not?

Watch Dogs' ultimate triumph is in just how alive it makes Chicago feel. More than Saints Row, more than even Grand Theft Auto V, Ubisoft's Chicago feels populated, thriving, buzzing with life. There's an ambiance to it, a sense of belonging to the world that no other city-based game has managed to capture as well. From the amount of civilians on display, to the random snippets of conversation and the bundles of optional content and dialogue, Watch Dogs' world is satisfying to simply be a part of.

Obviously, in a game about hacking, there is an obligatory Hacking Minigame that shows up frequently, as players will need to swivel wires to complete a circuit, sometimes within a time limit. It's fairly tedious, and takes one out of the game. The overall action itself can suffer from tedium at times, because there is so much content to chew through, and one can become quite exhausted of yet another romp through enemy territory, hacking the same old cameras and remotely bursting the same old pipes. It's awesome that there's so much game to play, but the opposite edge of that sword is in how tiring it can be to play through multiple missions at a time.

Multiplayer helps shake things up, with a Dark Souls style emphasis on "invading" the worlds of other players. During the course of your travels, you may be infiltrated by another player who is secretly tailing you to download personal details, or you could be warned that someone is attempting to hack your phone. Tracking down these rogue players is an intense game of cat and mouse, as you try to scan the area and profile the bad guy. You can, of course, invade someone else's world and do the same, all in the name of earning notoriety points that can be used for more upgrades.

Like with everything else on offer, there is a lot of variety in the online offerings. From races, to capture-the-flag style multiplayer, to the aforementioned invasions, there's a lot to try out, and it's all seamlessly integrated into the main game. Simply use Aiden's phone to move swiftly into the online world, or confirm when a pop-up offers an online opportunity. At the very least, the invasion-style missions are well worth indulging in. They're a lot better than I expected them to be.

Running on the PlayStation 4, WatchDogs looks very pretty in motion, especially when the environment starts raining at night and the reflections on cars and water come out in full force. It notably does not impress as much as it did when Ubisoft showed it off two years ago, but it's still quite nice. As I mentioned earlier, the soundtrack is perfect at building tension and atmosphere, though the selection of licensed tracks didn't speak to me like other open world games' have. Voice acting is pretty good across the board, with the bad guys in particular hamming up their dialogue to an effective degree.

Also, Jordi is a brilliant character.

Bottom Line: Polished to a mirror sheen, and bursting with content, Watch Dogs is a great looking game with a thriving open world and an empowering premise. It suffers from being an amalgamation of every other major Ubisoft game, to the point where it doesn't feel as fresh as it deserves to, but it's still a varied, rich, thoroughly dense experience.

Recommendation: It's perhaps the most believable open world game out there, and it's pretty damn fun to boot. Sandbox fans will miss out if they don't scope it.