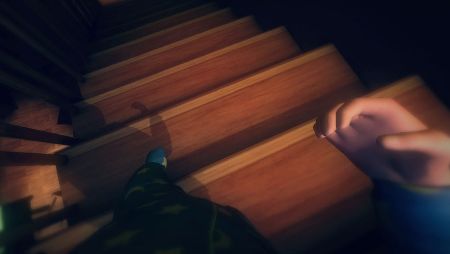 Among the Sleep has been capturing imaginations for years since it was first revealed, and it's not hard to see why. Embracing the recent boom of indie horror games, this dark tale aims to provide the ultimate disarming experience - placing players in the romper suit of a two-year-old infant. Add to that a successful Kickstarter campaign, as well as the magic words - "Oculus Rift support" - and you have a game to moisten the lips of any horror aficionado.

The result of all this excitement is, however, something worthy of a bit less enthusiasm. While charming and suitably atmospheric, this brief little story offers some rudimentary puzzle-platforming and not a great deal of extra meat to keep things interesting. An affable little ride, for sure, but not terribly fulfilling.

Among the Sleep starts on the second birthday of our "protagonist." A doting mother cuts the cake, coos over her child, and then receives a knock at the door. She appears worried. When she answers, her tone changes from saccharin to harsh. It sets the scene for a game that balances the cute against the sinister, though it also makes the game's eventual twist a bit too obvious.

Much of the story is driven forth by the baby's newly unveiled birthday present, a teddy bear that can walk and talk when mother isn't looking. Despite looking incredibly creepy, the bear is oddly adorable, and his soothing voice lends a great deal of sweetness to the game and offsets the often alarming background noise. Teddy's principle use in-game is as a makeshift lantern - when hugged, the bear radiates light that lends a little extra visibility to the surrounding areas.

Most of the game is spent solving fairly remedial puzzles, mostly of the "find this thing and put it here" variety. As players waddle and crawl around twisted environments that evoke a marriage between Tim Burton and Silent Hill, they'll be expected to pull chairs and drawers around to reach high places, hunt for hidden objects, weigh down planks so they can be crossed safely, and creep past bottles so as not to break the glass and cause trouble.

Along the way, players will be pursued by a shadowy monster with white eyes and wild, tendril-like hair, a reality-distorting beast that will scoop the child up and scream at it for an instant game-over. The creature appears only a handful of times, though when it gives chase, it can be a pretty intense experience. The intensity isn't always for the right reason, though - whenever Dark n' Creepy is near, the screen shimmers and shakes in a visually unpleasant manner that I found fairly obnoxious.

With its surreal visuals and macabre subtleties, Among the Sleep holds itself up predominantly on style. Some of the themes present in the game actually mean something to me personally, so I found the closing portions of the narrative successful in its attempt to reach me emotionally. There's an air of sadness running through the game that is hard to ignore, punctuated by Teddy's overwhelming adorability.

Even so, there's no escaping the fact that there's very little substance here. Puzzles are less developed than they were when Half-Life 2 did them years ago, the stealth mechanics - for as much as they could be called such - are rudimentary at best, and there are only four real stages of the game, all of which can be breezed through fairly swiftly. It took me less than two hours to get done, and while I consistently received a sense of mild enjoyment, there was nothing to grab me, and certainly no encouragement to ever play it again.

It's best to view Among the Sleep as something more story driven than the average horror game, though even then, there's not much story to be had between a gurgling protagonist and a teddy bear that doesn't know what's going on. Once you understand the "twist" of the plot - and for all its obfuscation, it becomes obvious fairly quickly - there's not much beyond the hammering home of one core plot point.

Even so, it's still easier to think more in terms of Gone Home than Outlast, a game more concerned with wandering from point A to point B and having a story unfold around you, albeit with a bit of token puzzling and monster chasing thrown in to keep people entertained.

I was excited for Among the Sleep, and I am glad it's finally out in the world. Despite not having a bad time with it, I still feel a little disappointed. Perhaps I expected too much, but I don't feel as if I did. The potential for a horror game starring an infant is overwhelming, but Krillbite didn't even so much as scratch the surface with something that, ultimately, is a less intriguing Machine For Pigs.

Bottom Line: Cute, and sometimes unnerving, Among the Sleep draws the player to an affecting conclusion, but its banal puzzles and shallow storytelling doesn't do a lot to inspire many thrills.

Recommendation: There is enjoyment to be gleaned from experiencing this little game, but it's not worth going out of your way for, sadly.