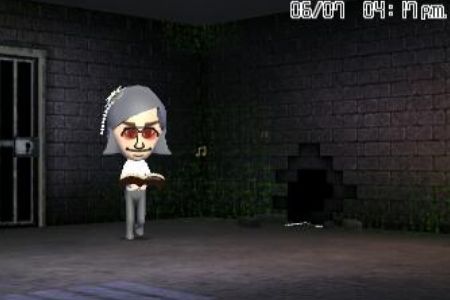 Freaky Constantina is currently married to Peter Kiddyfiddler, who goes by the nickname of Pedophile, because that was funny. They share an apartment complex with hated British celebrity Jimmy Savile, whose room is decorated to look like a jail cell. Conrad Zimmerman, who is a friend of mine in real life, frequently tells people to suck on his balls.

Welcome to Tomodachi Life, by far the best way to pervert a game developer's honest intentions and exploit a text-to-speech feature in order to make characters admit to jerking off every damn night. I particularly enjoy making them do that.

Look, there's more to Nintendo's strange life simulator than this, but let's not pretend that the most fun to be had isn't in rewriting the lyrics of a song to be about licking the juices out of the end of a swollen ding-dong. Obviously, there are word filters to block out the truly vile stuff, but that just makes one's inevitable subversion all the more delicious. Truly the thinking infant's game, Tomodachi Life tests the mind and focuses the imagination, as players will need to find inventive workarounds to allude to the blowjobs they want the characters to be obsessed with. Life will find a way, the famous philosopher Jeff Goldblum once said, and references to butt sexin' will find their way into any Nintendo game that allows me to do it.

But what is Tomodachi Life? It's got elements of Animal Crossing to it, though it's even more of a passive experience, carrying with it something of a virtual pet vibe. Once you've made or imported a bunch of Mii characters to fill an apartment complex, much of your time will be spent watching. Like a massive voyeur, you'll get to snoop on Miis as they sleep or hang out together at the beach. They know you're watching them, as they frequently refer to you. They love that you watch them. You can alter their speech so they say they love being watched. You can make them say anything. You own them.

You name an island, fill a building full of Miis, then help them with a series of banal tasks. Miis get hungry regularly, and will need you to buy them food. Different Miis like different foods, and if you feed them their favorites, their happiness meter will grow. You can also give them a change of clothes, new interiors for their apartments, or help them befriend and eventually fall in love with other island residents. If two Miis hit it off really well, they may even get married and move into a house together, and you can watch them enjoy their married life. Watching. Always watching. Like Yo Gabba Gabba, but slightly less frightening.

Every now and then, a Mii may want to play a game with you. Such games involve catching an item by tapping it as it passes from the top screen to the lower one, or guessing what an object is while it's zoomed in to an obfuscating degree. Succeeding in a game will unlock a random treasure item (and they really are random) which can be sold at the pawn shop for extra cash.