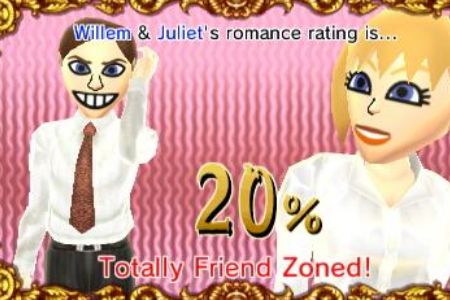 As play progresses, new parts of the surrounding island will unlock, from stores to places where Miis can hang out. Various minigames can be uncovered, such as the remedial RPG parody Tomodachi Quest, and one can visit a number of stat trackers to find out the compatibility or popularity of Miis. One can also uncover various usable items, such as bath sets or playground swings, which can be given to individual Miis in exchange for an interactive cutscene or minigame. There's no real reward for that, but you will make the Mii you give the gift to a little bit happier.

As Miis fill their happiness meter, they'll level up, allowing you to give them a permanent special gift, a new song to sing, a fresh interior for their apartment, or pocket money to fund a trip to the Moon. Miis do love to sing, and getting them all similar songs so they can form a musical act is quite charming, especially since you can rewrite the songs and make them sing about poo.

There are some random occurrences, too. Sometimes, two Miis will have a falling out, and you'll need to calm one of them down with a music box so they'll apologize. Miis can fall ill, and will need cold medicine to recover. Sometimes, a Mii might even be rejected after declaring their love, and will need a bunch of interaction in order to snap out of their funk. These are all fun little events ... the first time they're witnessed.

There's a lot of weirdness to this game, and witnessing the stranger cutscenes and dialog is very charming - once. Unfortunately, Tomodachi Life's status as a stripped-down Sims lends itself well to repetition, and for a game that relies heavily on random surprises, regurgitating content regularly is not a good idea. It doesn't take long for one to grow tired of seeing the same old cutscene whenever two Miis hang out for the first time, or skipping over sequences involving gifts because you've seen them all before. Such a passive experience could have done with more content, but every session of mine ended with me puttering out, running low on stuff to do quite quickly and having to wait a while for the Miis to decide to be interesting again.

Similar "wacky" games, like Noby Noby Boy and Cargo! The Quest for Gravity seem to have more fun with themselves than the players do, and Tomodachi Life is similarly hamstrung. The Miis themselves get to play at the beach, hang out at coffee shops, and generally enjoy more interaction than the actual player does. It's a world where the in-game characters get to do all sorts of fun things in the world, while we're relegated to simply observing it, and despite the Miis frequently talking to myself as a player, I feel less like I am included and more like I am a facilitator for the enhanced enjoyment of NPCs.

You need to be inventive about what Miis you put into the game, you have to rewrite the lyrics of the songs they can sing in order to make them actually funny, and you have to find all the little ways to be subversive if you want to keep the shallow experience entertaining for too long. If you can keep yourself imaginative, you can get a lot out of this minimalist take on The Sims. If you can't, you'll find nothing much to be worth your time.

Still, when Willem Dafoe is your neighbor, anything's possible.

Bottom Line: Tomodachi Life is a promising concept, and its abstract sense of humor can be very charming. It does, however, get old fast, and you'll find yourself making the characters say lewd things to keep yourself amused.

Recommendation: If you don't mind putting in all the effort to have a good time, there's a good time to be had. Otherwise, you won't lose a great experience by not rushing out to get this.