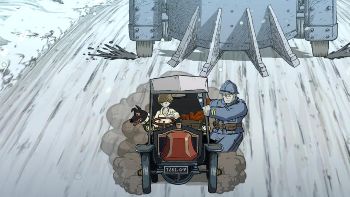 Emile has a shovel, and his adventure takes place mostly in the trenches, where deadly explosives much be avoided while item-based tasks are handed to him by fellow soldiers. Freddie's chapters are decidedly more action-packed, as he tosses grenades at enemy gun turrets, drives a tank over embankments, and has to avoid falling bombs. As Ana, players will regularly need to heal the wounded via a rudimentary rhythm game, while Karl primarily employs stealth, sneaking his way from French captors in a bid to return home to his family. The gameplay is not necessarily tied to one character - Emile will find himself in action-oriented sequences just as much as Freddie ends up solving puzzles - but there's a definite theme to each of the playable heroes.

At regular intervals, Walt will accompany the player, and he can be sent to pull levers, fetch objects, and distract enemy guards. Again, there's nothing truly groundbreaking here. Solving puzzles with a non-player companion is as old as the day is long, and nothing particular new is done with it. However, the dog is decidedly adorable, and simply interacting with him is a particular joy.

A couple of the fast-paced sequences rely a bit too heavily on trial-and-error, especially when it's rushing players forward and then ambushes them them gunfire they couldn't have expected. A number of puzzles feel far too much like busywork, too, requiring very little thought but a whole lot of carrying. There's really nothing too taxing, though, especially as you'll be gifted puzzle hints if you spend too long figuring out a particular problem.

The true standout of the game is a series of car chases that are, frankly, too few and far between. At various points in the game, players will take control of Ana in her red taxi, swerving from left to right to avoid pursuing opponents and oncoming obstacles. The hindrances occur on screen in time to a number of famous classical music pieces, giving the whole thing a "rhythm action" feel to it. These sequences are beautifully done, and provide some much-needed rousing between sidescrolling sections.

Valiant Hearts aims to be a somewhat educational experience, too. Entering new environments and finding optional items unlock factual tidbits about World War 1, detailing the history, culture, and tools of the period. There is some genuinely enlightening stuff in there, providing further context to the narrative and helping demonstrate just what conditions were like on the front.

Despite its comic book visual style, Valiant Hearts does an impeccable job of bringing to life the tragedy and the cost of World War I. Sequences including a poison gas attack on an entrenched position, as well as a truly incredible portrayal of the nightmare scenario that is going "over the top," provide a stark contrast to the endearing presentation, and hammer home the death and destruction so flagrantly produced by the war. There's stuff in here that made me think about the nature of warfare more than all the "gritty" first-person shooters under the Sun, and there's an effectively jarring disparity between the deeply personal stories of the characters involved, and the horrible ease with which everybody around them dies. This is a story of loss, of how war consumes everything indiscriminately, but also of just enough hope to make everything worth continuing to fight.

Though a highly conventional game from a mechanical standpoint, Valiant Hearts is one of those games that demonstrate how great presentation can turn the common into something remarkable. As a straight videogame, The Great War did not wow me, and yet I cannot deny the fact that it inspired an emotional outpouring from me that I quite frankly needed at the time. There are so few examples across all entertainment media that I can say that of, and it brings cheer to my cynical heart that videogames, for as coldly calculated and focus tested as they've become, are capable of inspiring a genuine and importing feeling in me.

Hell, you just wouldn't expect it from Ubisoft, huh?

Bottom Line: Despite taking shape as a rather unambitious adventure game, Valiant Hearts: The Great War nonetheless tells a beautiful story of loss and companionship with overwhelmingly evocative success.

Recommendation: If you're one of the set who value story over gameplay, this is well worth checking out. If you're the opposite kind of player, you may not quite get what you want here.