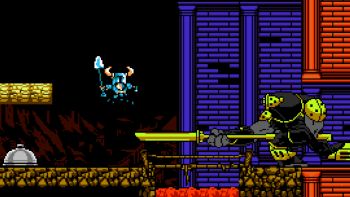 As the proclaimed Shovel Knight of the story, players must travel a world map, defeating enemy knights across an array of sidescrolling levels in a bid to defeat the Enchantress and rescue his companion, the Shield Knight. It's not a particularly complex story, but it doesn't set out to be, and it's nonetheless littered with eccentric characters and memorable enemies, with plenty of silly dialog. The boss characters in particular, twisted knights with overbearing themes reminiscent of Mega Man adversaries, are a lot of fun to meet.

Unsurprisingly, the knight is armed with a trusty shovel which can be swung at enemies, used to dig through blocks, and thrust downward after a jump to bounce, pogo-like, on objects and monsters. Most of the game is comprised of tricky platform jumps, making players navigate pits, spikes, and lava, while avoiding all the nefariously placed enemies. Using the knight's pogo-stick prowess to reach higher levels or leap across large gaps on the heads of floating enemies is a big part of the proceedings, and some tight controlling will be needed to navigate the trickier environmental challenges.

Levels are set out on a world map similar to Super Mario Bros. 3 and its ilk, with levels and other areas spread out along a series of connecting tracks. Parts of the map are blocked off until certain levels are cleared, and there are many optional stages, bosses, and odd little environments to explore. In town, players can chat with NPCs, as well as spend money to bump up their health, raise their magical ability, and acquire unique magic items that grant the Knight extra attacks and skills in the battlefield.

Tons of that delicious money is earned in each level, and there's a lot to spend it on, from the aforementioned passive upgrades, to new shovels and armor, all of which can be damn expensive. Actually retaining that cash is a tricky thing, though, as Shovel Knight eschews lives in favor of a Dark Souls-style punishment system. Should you die, you'll return to the next checkpoint minus a significant portion of your acquired money, which remains where you died in winged floating sacks. If you perish again before collecting the flying bags, you lose the funds for good. It's a nice system that cuts down on frustration and ensures you can keep replaying the game, giving even the toughest stages that "one more go" factor. It's a mercy that helps counter my earlier complaint significantly, which is nice.

From the already namechecked Castlevania and Duck Tales, to The Adventure of Link, to Golden Axe and more, Yacht Club drowns the players in thematic references and blatant inspirations. While there isn't much in the way of explicit referential parody, it's not hard to see the tributes to a bevy of classic games. In this age of nostalgia-driven money grubbing, that's hardly anything new, but there's something more heartfelt in the way Shovel Knight digs into the past. This isn't the kind of game that makes a "Your princess is another castle," gag and expects to skate by on soulless mimicry. This is a game made by people who know why these old games were so endearing, and pays tribute with utter deference.

While still seeming to think Medusa Heads are fun.

Bottom Line: A fun action platformer that remains incredibly frustrating by taking a few too many cues from Castlevania's jerkiest moments, Shovel Knight is satisfying and infuriating in equal measure. It's also a damn fine callback to the days of yore in a world where callbacks are a dime a dozen, and rarely this well done.

Recommendation: Did the old games I namedropped make you feel all warm and happy inside? You'll enjoy this a lot, I reckon.