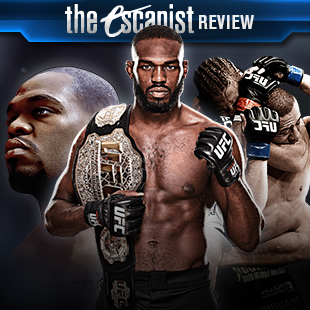 If you grew up on the likes of Street Fighter and Tekken, then you're probably accustomed to being able to pick up a controller, sight unseen, and still put up at least a bit of a fight against a more experienced player. Button mashing won't win you any Street Fighter tournaments, but, unless you're playing at a professional level, you'll usually be able to get a few good hits in and not feel too bad about yourself at the end of the match. That's not so much the case in UFC, where button mashing is punished by the game's mechanics, and even more so by players that have even a semblance of an idea of what they're doing. UFC is not a fighting game. It's a rigorous technical exercise behind an entertaining façade of people beating the pants off each other.

UFC is gorgeous on Xbox One, and ostensibly so on PS4. The fighters look frighteningly realistic while they idle, and even during the action of matches it's almost eerie how lifelike the characters are. Outside of some hilarious technical glitches during bouts, the physics keeps up with the action impeccably well, making for some almost painful viewing experiences as punches connect and drops of sweat and blood fall to the canvas from the injured fighter. The physics and graphics jive so well together, in fact, that you can almost feel the impact as you land a roundhouse to the temple, or absorb a superman punch.

Where the graphics and physics are generally superb, the controls leave something to be desired for less adroit players. The face buttons on the controller are punches and kicks, which is simple enough to grasp. That's where the simplicity ends. There are multiple modifier buttons that you can hold to use different strikes, as well as directional inputs changing what attack you make, which means you're trying to navigate upwards of 20 different stand-up attacks. Then there's blocking, dodging, takedowns, clinch, and transitions. Knowing exactly which button or analog stick motion to input at any given moment is crucial in all but the most rudimentary matches in UFC, and it seems set up to allow an experienced player to absolutely dominate a new recruit in all but the luckiest of scenarios. That's not to say it's all bad, but it's far from being accessible, and will take some patience on the part of experienced players not to just choke out friends playing for the first time.

UFC offers the standard fare for game types. You can pick a fighter and go straight to a match, or you can start a career and create your own custom warrior. There are a number of challenges to help hone your skills so you can take on tougher fights, as well as online play so you can test your mettle against other players. Unfortunately, for a game that lends itself so well to serious competition, the online play was a laggy experience throughout. Matchmaking was quick enough, but as soon as the match started, characters started stuttering and inputs were periodically ignored. Career was significantly more enjoyable, however, since it allows you to create your own fighter and customize their stats and abilities to your liking. If you don't want to mess around with the whole wrestling thing, you can create a fighter that specializes in striking and just aim to KO your opponent before they get a chance to take you down. Just punching your opponent in the face repeatedly is a lovely respite from struggling with the more technical aspects of submissions, escapes, ground transitions, and all the rest. You might not be able to go all the way in Career mode without being at least marginally well rounded, but a 23-second KO using nothing but punches to the face is surprisingly gratifying after getting submitted repeatedly by more experienced players.

UFC sports a fairly impressive soundtrack, although you'll likely notice a tendency to replay the same handful of songs ad infinitum, while completely ignoring the existence of others. As grating as it can be to hear the same pseudo-metal track for the hundredth time, the overall soundtrack is still a mostly enjoyable part of the overall experience.


Players looking to step into the ring as the world's most famous martial artist, Bruce Lee, will have a trying time ahead of them. While Bruce Lee was apparently available as a pre-order incentive, if you're just picking up UFC now, you'll need to either shell out some extra cash via microtransaction or beat Career Mode on Hard to unlock the legend. It's frustrating, to say the least, when you've got hours and hours of playtime ahead of you before you can finally do what should be available from the outset. While hugely disappointing not to be able to immediately jump into the octagon with everybody's favorite fighter, losing with Bruce Lee feels awful, so it's advisable to get some practice in beforehand.

UFC is an enjoyable distraction, if a tad more technical than some may like for their fighting games. It's got an uncannily real feel to it between the lifelike character models and the (typically) stellar combat physics. Watching blood splatter the ground amid droplets of sweat as you pummel your opponent's head in full mount offers a visceral sort of glee. Unfortunately, a laggy online experience and repetitious training sessions between every fight in Career Mode severely dulls UFC's shiny exterior.

Bottom Line: EA Sports UFC doesn't cater to button mashers, so be wary if you're not eager to learn an overly-complex control scheme. More technical gamers will be able to appreciate the gameplay to a greater extent, but the laggy servers make even this an exercise in frustration.

Recommendation: Serious UFC fans can get a vague sense of the technicality of the sport with the game, but button mashers - and any but the most dexterous gamers, for that matter - need not apply.