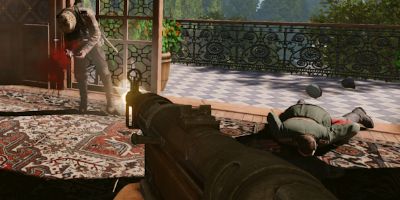 At a time in which World War II shooters were considered passe years ago, a World War II shooter can become king. So allegedly dead is the horse, World War II titles should be able to stand out thanks to the endless modern military shooters and zombie games that rose to take their place. Enemy Front aims to do just that, claiming to be the "first truly modern WW2 FPS" and promising to make the murder of Nazis fun again.

In fairness, CI Games' tale of Reich and resistance neither feels truly modern or particularly fun. It is a World War II first-person shooter, that much is true, but it feels like it could have been released more than five years ago and fit right in. A WW2 FPS is all it is. No more, no less.

The paper-thin story revolves around a journalist whose name I've forgotten because it isn't important. He's in Europe during the second World War, and he's shooting German soldiers for the resistance because that's what you do. That's the plot more or less explained.

When it first begins, Enemy Front makes things a little interesting by allowing you to choose your missions. This choice is something of an obfuscation, since you'll end up doing them all regardless and only really get to choose which mission is played first. Oddly, after this illusion of player agency, the game drops the premise almost entirely, settling into more linear progression while only occasionally offering optional objectives during levels that only occasionally offer a tangible reward. Enemy Front loves weird things like this - ideas that are half-introduced, or dropped at a moment's notice. Over halfway through the game, you gain the option to draw chalk symbols on the wall for no real reason. You can just start doing that on preordained surfaces now. I never found out why.

While interesting ideas are malformed and dropped, trite and long-overplayed ones are repeated all the time. You'll regularly be called upon to grab the usual gun turrets, or pick up the usual rocket launchers to shoot the usual tanks, or engage in the usual obligatory stealth sections. "Usual" is a watchword here, as the game fears trying anything new in favor of pouring established, conventionally conventional gameplay tropes all over itself.

Combat is wholly unremarkable, with a range of standard period weaponry and a whole bunch of mooks at which to fire. To its credit, the game attempts to make its battles more difficult with fairly merciless enemies - they'll attempt to attack the player from multiple directions, and it doesn't take much damage to get knocked out of the fight. However, the AI really isn't up to the desired task, and most battles become fairly dull exercises in ducking behind a wall, popping up to fire at someone, and repeating the process until everybody's dead.

Stealth is usually optional, and it's clear nobody put much thought into its creation. For one thing, you can sprint the whole way through a level without being spotted, thanks to an alertness meter that takes a long time to fill. Trying to murder opponents using stealth is not recommended, as the execution animations take a ridiculously long time to complete and almost always end in the player getting spotted. It's far better to ignore enemies entirely and race to the next checkpoint, should "sneaking" be your thing.

Enemy Front is not terrible. It's too bland for that. It's just a very dated and mundane trudge through old fashioned game mechanics and formulaic combat scenarios. Inoffensive, but far from thrilling. It gets point for trying to bring back the flavor of older, pre-Modern Warfare Call of Duty, but it neither builds upon, nor even really matches, the experience in any meaningful way. All it really does is come off like a mimic, desperately aping Call of Duty (right down to its scripted ending sequences that tries SO HARD to make an impression) while failing to grasp why people dug those older releases.

It's just another World War II shooter in a world that doesn't even produce them anymore, an archaic experience that will do little to make FPS developers question why it abandoned the time period. It's like the last half a decade never happened when playing Enemy Front, which might be cool for some, but when there are better alternatives you could be playing from five years ago, it's tough to recommend this throwback for any reason. It's a pretender in the shadow of its sub-genre, taking all its cues from superior titles and not even doing a good job with the reproduced ideas.

There's multiplayer, but two or three people are playing it, leading to large empty maps, and an additional story mode on top of the main one if you absolutely can't get enough of the same old tired shooting sequences. Also, the game's visuals are about as old and tired, despite CI claiming it looks gorgeous. This is to say nothing of the graphical glitches and regular hard crashes, all of which do very little to further endear the game to me.

Bottom Line: As dated and tired as any of the games it tries to copy, Enemy Front fails to make World War II shooters exciting again, and may actively be reminding us why we got so bored of them.

Recommendation: There are some terrific WW2 FPS games out there. Go play those instead, or Wolfenstein: The New Order, if you want to blast a hole in the Third Reich.