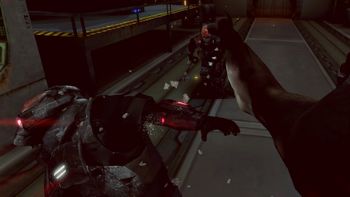 Infinity Runner proudly bills itself as a cross between Mass Effect and Mirror's Edge while promising werewolves in space. That's a hell of an elevator pitch. Unfortunately, developer Wales Interactive failed to namedrop the most pertinent - and potentially offputting - influence. We talk of the popular, but maligned, Temple Run.

That's what this is, more than anything. It's Temple Run meets Temple Run ... with a hint of space werewolves.

In truth, all Infinity Runner shares with Mass Effect is the setting of outer space, while Mirror's Edge comparisons are a long stretch at the very least. Make no mistake - this is an endless runner, like the dozens found in the mobile market, played in first-person. With that mighty disclaimer out of the way, I can now feel confident in saying that Infinity Runner is surprisingly enjoyable.

Players awake, naked, on a space ship, and are compelled by a lady with a crazy/cool hairdo to run really fast. So fast, in fact, that if you smack into a wall, you die. Seems legit! To turn corners at designated moments, one must move the mouse left or right and look in the correct direction. The linear path upon which players automatically run is divided into three lanes, and our nude sprinter can move to the left or right lane if the correct buttons are held down. The right mouse button causes players to slide, while the left one controls jumping. With these simple controls, a number of chasms, lazers, robots, debris, and other obstacles will be slid under, leaped over, and dodged. And of course, there is random crap to be picked up, because we must conform to genre norms.

Combat sequences occur now and then, and when I say combat I mean there are quick-time-events. When enemies appear onscreen, the action slows to a crawl and players must input button prompts to watch their avatar kick some random looking alien soldier things around. When taken as part of the whole experience, these QTEs stand out as unnecessary, breaking the fluidity of the running while adding absolutely nothing of value.

The running itself is shockingly enjoyable, though I say this as an existing fan of certain endless runners like One Epic Knight. The speed at which each level moves is disarmingly swift, and obstacles can occur in quick, stressful succession. At times, the game relies on ambush a little too much, but once one gets wise to its tricks, it can be exhilarating to dash through a stage, ducking and weaving past hindrances along the way. There are only three lives per stage (a fourth can be earned by picking up the random crap), and if you lose them all, you're shunted to the beginning of the level. This can provide a tense, if sometimes annoying, sense of urgency.

I almost forgot to write about the werewolves, mostly because their inclusion is largely pointless. Basically, sometimes the player character turns into a werewolf (because why not?), able to ignore most obstacles for a limited period. The only challenge in these sections is using the wall run feature, pressing left or right and then jumping to spring along the wall. I don't see the point.

As enjoyable as it is, Infinity Runner is held back by a glaring, fundamental problem. While the central premise looks great on paper, the fact is that a first-person endless runner, complete with head-bobbing animations, can be incredibly disorienting. Similarly, the controls are elegant from a mechanical standpoint, but having to look left-and-right to turn corners at high speed is visually confusing. At least corridors are usually clear for a few moments after turning, allowing one the time needed in order to self-right, but the process is jarring nonetheless.

Really, the whole idea shouldn't work as well as it does, so Wales Interactive gets credit for turning a frankly ill-advised game into something not only competent, but entertaining. I couldn't recommend this to anybody prone to headaches (I don't even want to think about this game's touted Oculus Rift support), and it takes some getting used to, but there's a good laugh to be had as reward for coping.

Infinity Runner looks good, with decent graphics and a strong sci-fi visual style. There's some thumping music that drives the action well, and the voiced character - that hairdo lady I mentioned - is quite affable, even if the acting is a little strange and the written dialog embarrassing. It's a solidly presented game, if nothing else.

As well as a main story mode, stages can be replayed in Arcade mode, which allows one to set a time limit or play in a truly endless sequence. There's also multiplayer, but I have no idea what that's like because I am fairly certain I am the only person in the world playing it. Is anybody even reading this?

Bottom Line: By nature of its very premise, Infinity Runner is an addling game that ought not work. It succeeds far better than it should, however, and surprises in how fun it can be.

Recommendation: If you're a fan of endless runners, this is a twist on the idea that could be worth checking out.