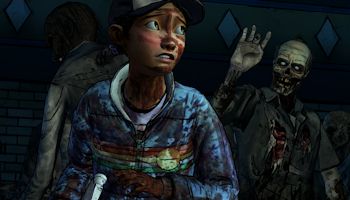 Season two of The Walking Dead has been pretty damn good thus far, but very little has happened beyond the opening episode to truly suck me into the plight of Clementine and her newfound associates. Amid The Ruins goes a considerable way toward changing that, with an expertly structured installment full of the kind of characterization this season has sorely needed.

By far the star of this episode is Kenny. To call him "long-suffering" at this point would be an understatement, and while I won't spoil the events that have led up to this point, suffice it to say that the man has had enough. A large part of the story revolves around Kenny's continued darkening as a character, something we saw brutally enforced at the tail end of Episode Three. Knowing just how dangerous Kenny can be makes any heated dialog with him particularly unnerving, so naturally there's plenty of that on the table.

Quite where Telltale is going to take Kenny's character is anybody's guess at this point. The narrative is ripe for a true crossing of the moral event horizon, or a heartwarming redemption. That said, the world can just pour more misery on the guy until he finally breaks apart. Whatever happens, he is by far the most compelling aspect of the story thus far, and a real standout in this particular episode. At once intensely sympathetic and genuinely frightening, his arc is one I really hope resolves in a climactic fashion.

Beyond Kenny, the largest conflict comes in the form of Rebecca and her imminent baby. Again, I can't detail too much without going into spoiler territory, but the question of whether one could - or indeed should - bring a child into The Walking Dead's horrible world is touched upon throughout the episode. It is perhaps a bit too lightly explored, as truly I'd love for the game to put those questions on the player, but the ideas are instead presented without much in the way of conclusion, and only surface level suggestions.

Clementine herself spends a lot of time with Jane, the hard-bitten woman who escaped from Carver along with the crew. She fits neatly into the "pragmatic survivalist with a buried soft side" trope that tends to rear its head in apocalyptic stories, and she does a good job running with that ball. A likable character with some nicely sandwiched depth, it's hard not to want to stick with her over the rest of the group, seeing as she makes a lot more sense than the lot of them.

Hard choices are expected at this point in the game, and a few dilemmas present themselves. Perhaps more crucially, the consequences of one's choices are presented in spectacularly harsh detail in this particular installment. At the mid-point of the episode, players will face having to make a particular sacrifice to ensure their own safety, and the result of that decision is one of the most graphically uncompromising events of Telltale's entire Walking Dead production. There will undoubtedly be long-lasting effects spawning from this episode - psychological ones, if nothing else - as Clementine inevitably faces the guilt that's coming.

The episode closes out with the introduction of new characters and a brutal last-minute swerve that ends things on a major cliffhanger. With a final tragic revelation and a sudden jump to the credits, Amid The Ruins ends on a bang - quite literally - and keeps me on the edge of my seat, waiting for the next chapter.

Bottom Line: The most memorable episode since the season premier, Amid The Ruins fleshes out the supporting cast, provides some nasty scenarios, and takes Kenny's personal arc to some very haunting places.

Recommendation: We're four episodes in. You need one of these by now?