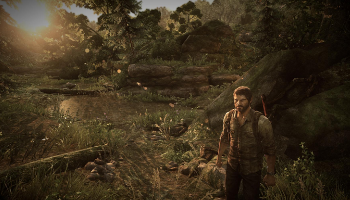 The Last of Us is undoubtedly one of the finest games of the last generation. Despite appearing at the tail-end of the PlayStation 3's time in the spotlight, Naughty Dog's tale of survival and mushroom-headed zombies was a finely structured, provocative story, blending action, stealth, and survival horror in a way that pleased me to no end.

Having appeared so late in the generation, it's almost no surprise that Sony would want to give it another chance, extending its shelf life and giving it a place on the PlayStation 4. The Last of Us Remastered is the result of such desire, a visually enhanced version with tweaks and polishes to make it look at home on the PS4. While "remastered" might be a bit of a stretch (most "remasters" are simply updates, and this is no exception), the overhaul is beautiful indeed, and the game is still an enthralling masterpiece.

If you're new to The Last of Us, it's a story about Joel and Ellie, two survivors caught in a quest to help discover a cure for a fungal infection that turns humans into screaming, violent monsters. As they make their way through the remains of civilization, they'll fend off ragtag bandits, merciless military police, and several strains of infected, including the horrifying Clickers - blind, instantly lethal monsters that creepily chitter their way around the environment.

What I love about The Last of Us is how it takes some of the most familiar "zombie apocalypse" tropes and executes them with a sense of subtlety and nuance to make them stand out from the slew of other zombie games. With characters that are more than one-note caricatures, a narrative that allows its tone to shift between lighthearted, action-packed, tragic, and terrifying, and gameplay that does several different things with an equal amount of accomplishment, The Last of Us remains one of the best games out there, in any category.

It's a game about preparation, and observing the environment to take the best approach. Joel can craft items using resources gathered in the environment to create bombs or shivs. Bottles and bricks can be thrown to create distraction, or used in combat to take down enemies quickly. By listening, players can track enemy movement and get a read on the battlefield. Opponents can be stealthily taken down with care, but if that approach fails, players have options to punch or shoot their way to victory, or sometimes even completely flee should things get too hot. There's a flexibility in combat that feels empowering without ever making the player feel too powerful. After all, a Clicker has only to grab you once before it's all over.

As for those Clickers, they're still some of the most intimidating adversaries I've ever encountered in a videogame. Unnerving in terms of sound and animation, these perverse creatures are masters of dread, forcing caution in players as they slowly move and try not to trigger the monsters' sonar. A group of these things meandering about, even in broad daylight, is creepy has hell, and they're easily some of my favorite enemies in horror history.

The Last of Us is a game of gorgeous setpieces, of skillful storytelling, and memorable conflict, with a sense of completeness you just don't see in other releases. From its evocative intro to its perfect ending, Naughty Dog's best work is still a thing of utmost beauty, and it's a beauty that's certainly enhanced on PS4.