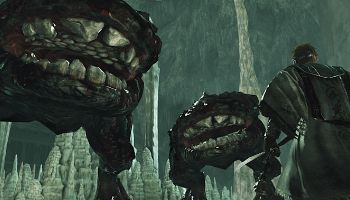 Crown of the Sunken King is the first episode released in Dark Souls 2's trilogy of DLC offerings, with Crown of the Old Iron King and Crown of the Ivory King coming over the next few months. Good DLC should have a pretty firm goal; provide you with additional - and extraneous - content. In this ideal scenario, fans of the game can throw more support at the developers and in return get to experience a bit more of the game they love. And Crown of the Sunken King is exactly that, it's a little self-contained extension to Dark Souls 2 with a great new area to explore and ultimately die in.

As typical for Dark Souls games, story is derived and extracted from the environment and items descriptions more than simply being told flat out. Players are attempting to reclaim a crown previously owned by King Vendrick, a character central to the story of Dark Souls 2, but there's plenty of details woven in the experience that gives you some idea of what happened to the area you'll be adventuring in.

Easily the best aspect to this DLC is the level design of Shulva - Sanctum City, the area the DLC takes place in. While on the whole I did like Dark Souls 2 a little more than the original, one of my few criticisms of it was that the level and map design wasn't quite as strong. Dark Souls was absolutely brilliant at times with how everything interconnected and how it could transition from one kind of area to the next. It's a pleasure then that Crown of the Sunken King feels like a return to form. Unlocking a short cut and realizing how that suddenly shifts your whole route through the map is more deeply satisfying than it has any right to be.

Taking place in a stunning underground cavern with temple-like structures and plenty of flowing water, the areas and sections in Crown of the Sunken King cleverly transition into each other, offering new challenges at a pace that's designed to trip you up just as your mastering the particulars of the previous one. The level begins with more open areas where you'll activate pillars to reach secrets. The pillars can also be cleverly used to more easily block line of sight with the archers that litter the map. Just as you feel like you're getting a hang of the platforming and enemies, you get sent into more claustrophobic trap-laden corridors with some newly frustrating foes to battle.

This area had one of my favorite, and challenging, parts of the DLC. There is a sequence of rooms with these nasty ghost knights through-out the area. Just before this you get a little cleverly placed preview room where you figure out that you need to destroy suits of armor first in order to be able to fight these knights. The twist in this section is that the suits of armor are not right nearby but hidden away and guarded much deeper in the area. Oh, and there are spikes littering the floor, and mages that are trying to snipe at you from catwalks about. What makes this a great challenge is that it forces you outside your comfort zone of exploring a new area in a shield up methodical way as moving quickly is the only way to not get surrounded by these relentless and invulnerable foes.

There are plenty of other new enemies on hand as well. The bog standard Sanctum Soldiers litter the whole DLC map. They are not particularly challenging, but appear quite resilient to being staggered and occasionally come in varieties that emit a constant poisonous fog around themselves. Another especially annoying enemy is a new cluster of those poison spitting statues that you encountered earlier in Dark Souls 2, except now they are on top of a moving creature and can't be destroyed except by attacking the creature directly. The big pay-off are the boss battles though, which I won't spoil here, but they are sufficiently challenging depending on your specific character build. I started the DLC with a mid-hundreds soul level character focused on strength and greatswords and that felt just about right to not be overly hard or frustrating, well at least not all the time, but neither was anything a push-over.

Also, quite importantly, the DLC offering matches up nicely with the cost. Your individual results might vary, but I've gotten at least 10 hours out of the experience, which lines up nicely to the $10 price tag or ~$8 if you bought the $25 pack. It's possible that you could track down all the secrets and items and defeat the bosses in less time, but it's still a decent buy shaving an hour or two off that. I'm now eagerly awaiting the next two episodes.

Bottom line: If you like Dark Souls it's more new Dark Souls to explore.

Recommendation: The excellent level design in this latest outing is some of the best in the series. Fans of Dark Souls 2, and those that prefer the original to the sequel, will want to grab this right away or wait for all three episodes over the next few months.