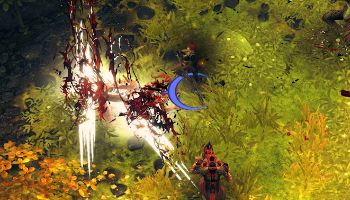 Players are showered with gold at every opportunity, but the accumulation of wealth feels hollow. Before long there's no real joy in undertaking non-story missions or finding hidden chests full of treasure. Gold is spent to unlock the handful of gated-by-level extra attributes available to equipment and special attacks, while an "item shop" between stages is accessed only for consumable items like health potions. The thrill of tackling a major boss to get showered with items and equipment has been taken out, replaced with rewards that feel ultimately pointless. It's not like you can even spend the gold without the game allowing you, since equipment and ability purchases are all locked by the same, "have fun when WE say so" attitude employed across the entire game.

The most interesting aspect of customization comes in the form of weapon spirits - equippable characters that grant bonuses and handicaps on characters. Equipping the Dark Elf, for example, makes a charged bash attack far more potent, at the cost of charged bashes reducing your health by 15%. Meanwhile, the Vampire grants health regeneration every time you hit an enemy, but health orbs dropped in combat are only 50% effective. Playing with weapon spirits is quite fun, though once again, the way they level and the rate at which they are unlocked is all determined by the game, with no control allowed to the player.

With such little agency, Sacred 3 players are really just left to hack and slash their way through stage after stage of grimmocs and and zombies. At the very least, combat itself can be fairly satisfying, with each fight feeling fast and responsive, and waves of enemies falling to one's blade with the kind of relaxing violence one expects from the Dynasty Warriors series.

When you find the combination of special attacks that work best for you and couple them with your favorite weapon spirit, there's a lot of dumb gratification that can be had. Most of the stages are a little easy, but one can switch difficulties on the world map, and any stage can be tackled out of order - though if you go for stages designed for higher levels, you may face very stiff resistance.

Drop-in co-op works quite well, and the more players you have, the tougher the monsters get. You can sort matches by players of equivalent level, or you could be a level 4 character and just jump into a level 20 player's game - if you don't mind having to be constantly revived. Co-op play is really the way to go, as it adds a bit more energy and oomph to proceedings.

Sadly, with a game so stripped bare of player input, Sacred 3's biggest problem becomes an overwhelming sense of repetition. Once you find those aforementioned skills and spirits that work best for you, there's no reason to change things up, and since each skill is leveled up at different, predetermined parts, there isn't really anything to work towards for vast periods of time. As if that wasn't enough, weapon spirits themselves keep spouting out stock phrases from a limited pool, in annoying voices, driving home the sense that you're doing the same things over and over again.

It's sad, because Sacred 3 can be a lot of fun, and there's plenty of content - even if the world map has locked stages that exist simply to keep trying to sell you downloadable content (seriously, it's gauche as hell). It's just that, for as much content as there is, there's not enough gameplay to keep it exhilarating. Games like Castle Crashers and Dynasty Warriors at least have a lot of characters, leveling options, and unlockables to offer. By comparison, Sacred 3 feels minimalist to a disappointing degree. It's just tiring to keep doing the same thing over and over again, and this is coming from a button mashing fan who generally doesn't mind repetitive combat, provided it does something to keep me energized.

I'll give it one thing though. I've not seen a cast of heroes and villains this diverse in the big-budget gaming sphere in a long, long time. At least there's some variety somewhere in this thing!

Bottom Line: Sacred 3 is a mildly fulfilling hack and slash game that, while fun in limited doses, isn't a patch on previous entries, and does very little to stand out within the genre in which it wishes to now be housed.

Recommendation: Fans of the original Sacred games may well be let down, while fans of hack and slash action games have better options already. It's fine enough, but don't rush to get it.