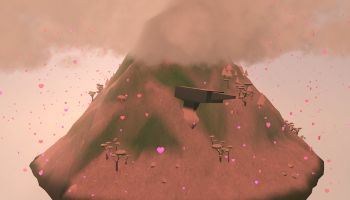 When I was four-years-old, my father gave me a music box. It seemed like any other music box. You wound it up, opened it, and it played a tune. I never knew the name of the melody, but to this day, I still recall it in the mind of my heart. It was beautiful, achingly beautiful, but tinged with a melancholy that brought down the hammer of mortality into the dreams of even a boy as young as I had been.

Like a ghost of a long-lost love, that melody has haunted the echoing chambers of waking thought, drifting through the fog of my moonlit internal travels with its bleakly seductive Siren's call. Yet I still know not the name. If only I could push my cellphone into my brain, and use the Shazam app to glean musical insight from my somber memories. Alas, I cannot. The technology is just not there yet.

My mind is as if a mountain, a mountain that can feel, can think, and can - above all - desire. It is this lust for the unattainable, this need for something more, this reaching with invisible fingers toward a goal of indeterminate origin, that permeates the experience of Mountain. For indeed, we all are mountains in our own unique ways, stood alone in stony silence, our snowy peaks tinged with desperation and regret, our rocky bases heavy with the throbbing anxiety that stalks us for the crime of simply being alive. Sex. Madness. Sadness. Ambition.

Mountain explores our hopelessness, our despaired yearning, and so much more besides. Like a buzzing bee buzzing with the buzz of electric in a buzzing city where everybody's looking for the next big buzz, it flits and darts from one concept to the next, seemingly erratic in its pace, but deceptively calculating with its predetermined patterns. It's like a fireman, with a fireman's uniform and a fireman's axe. Fighting fire. The fire of the human condition.

If you were to ask me to sum up my thoughts on Mountain concisely, I'd simply smile, and say that Constantin Stanislavski already did so, when he said:

"We have as many planes of speech as does a painting planes of perspective which create perspective in a phrase. The most important word stands out most vividly defined in the very foreground of the sound plane. Less important words create a series of deeper planes."

Or indeed, Roy Batty when he said:

"I've seen things you people wouldn't believe. Attack ships on fire off the shoulder of Orion. I watched C-beams glitter in the dark near the Tannhauser gate. All those moments will be lost in time... like tears in rain... Time to die."

I think one of those two men were a novelist or poet or something.

Of course, those are simply brief overviews, lacking the true depth and nuance of deep nuance that one would require to adequately describe what Mountain is, and how it feels. One is reminded of the famous serialized drama, Saved By The Bell, and the messages contained within its episodic narrative. For indeed, when we wake up in the morning and the 'larm gives out a warning, we often feel like we'll never make it on time. In our conceit and endless quest to please others, we waste just as much time grabbing the books as we do giving ourselves a look, so much of it, in fact, that we're usually at the corner just in time to see the bus fly by.

The bus of course, meaning life itself. Life itself flies by just when we're ready to embrace it, because we were too busy sleeping late and giving ourselves a look.

Then there's that time the one from Showgirls got hooked on caffeine pills, and that was sad.

So what is Mountain? Perhaps a more pertinent question would be to ask, "what has Mountain?" Yes, it's suddenly clicked with you, hasn't it? Turn the mountain one way, we feel something, but turn it another and we suddenly see the world in a different way. Pull back, retract from the mountain, only to witness the desolation of the soul and the vast emptiness of life itself. Draw closer, closer to the mountain, as close as a lover's embrace, and drag one's eyes over every subtle crag, every teasing nook, and truly feel what intimacy actually means in this sad and sorry world.

And where, exactly, does Michelle Rodriguez fit into all this? The simple answer is that she doesn't, but a less simple answer is that she totally does, like, all the time, totes. Michelle Rodriguez was, of course, born on July 12, 1978, and Mountain released on Steam - born itself, in a way - on August 18, 2014. Coincidence? Blind luck? Or an even deeper message than the other messages I've worked out so far, all of which are pretty damn deep. You decide. But I've decided correctly.

So again, I ask, WHAT IS MOUNTAIN? Is it a survival horror game? An open world survival crafting game roguelike with horror elements? A thirst person shooter? A survival-based sandbox retro platformer with roguelike elements and horror overtones? Sports? The answer is no. You cannot begin to comprehend what Mountain is, because it stands defiant (perhaps like a mountain?) in the face of convention and description, the Michelle Rodriguez of videogames, saving us by the bell like tears in the rain.

I lied about the music box thing. Sports?

Recommendation: I have heard of Bertolt Brecht.