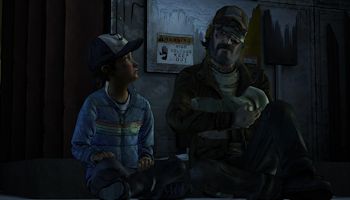 The Walking Dead's second season finally wraps up with No Going Back, culminating four installments of tense, carefully collected build in one brutal finale. In this final installment, a tragic story arc is concluded in ways unprecedented, as player choices will finally have dramatic effects on the whole story.

The strongest element of No Going Back is its ability to tie together everything we've seen previously in the series. Story elements that seemed to be filler, or to have no lasting effect on the narrative, are thematically brought into the final episode. This is most true of Carver, whose influence on the story comes to a vicious head, with Kenny at the forefront.

Season Two has been just as much Kenny's story as Clementine's, and how that story concludes is truly up to the player. The darkening of his character, and the sense of fearful awkwardness his presence had started to bring, is explored in full with this final episode, and the way in which players deal with him have huge ramifications. This is not simply a case of making a choice that only slightly modifies the plot - there are wildly different multiple endings this time.

Each ending is perfect in its own way, concluding the character arcs of Clementine and Kenny in ways that manage to fit, despite being so different. Of course, it's my policy not to spoil anything, so I can't go too in depth, but I feel that, no matter what ending one gets, there's nothing that will prove unsatisfactory. I have my own particular favorite, and it's not actually my original choice, but they're all superb.

No Going Back is more than just its final scenes, however. Leading up to the dramatic final choices, we deal with the growing bonds of the final band of survivors. One criticism I had of the season overall was that I never felt truly close to any of the supporting cast, but with the previous episode, and now this one, I feel that the final band of survivors are all fully realized characters that are hard to dislike, and that makes the eventual fate of each of them all the more compelling. This final episode makes full use of its time to sadden, surprise, and shock the player with a few last twists, and one particular showing of true colors that genuinely upset me.

The subtlety, sadness, and flashes of hopeful humor that have come to typify Telltale's The Walking Dead are on top form for this final outing of the series, tugging on the heartstrings just deviously enough to make every major event all that more agonizing. As characters reveal themselves to Clementine, I found it harder and harder to make the right choices in response, where usually I'd have a good idea of what to say. In this episode, sometimes just letting people talk unhindered really does feel like the correct choice.

As the season concludes, we must take a look at the overall production. With the second series, Telltale experimented with briefer running times, smaller episodes that updated more regularly. The decision affected the tone of the game, and not always for the better. As previously noted, I felt characterization wasn't as strong, and I was just that bit less emotionally invested. However, the upshot is that this was a tenser, more frightening season, even if the fear came from the fragile social interactions more than any mortal danger. Moments such as the first interaction with Carver, the touchy navigation around Kenny's mood swings, or the stand-off with Arvo at the observation deck, not to mention the many crises of Episode 5, contribute to making this a more nerve-wracking experience, even if it wasn't quite as memorable.

All that said, Telltale continues to prove why it's among the masters of storytelling in videogames today, with an almost unmatched grasp of how to write believable characters, meaningful situations, and create a sense of tragedy and horror that truly engages with the player, thanks to a depth and nuance that you just don't see in other games.

No Going Back, I hope, is not where Telltale leaves its take on The Walking Dead. Quite how they could continue Clementine's story, or indeed if they should, remains to be seen, but whatever Telltale does, I'll be there to experience it.

Bottom Line: No Going Back provides not one, but three fitting ends to The Walking Dead's second season, each one satisfactory - and saddening - in its own right.