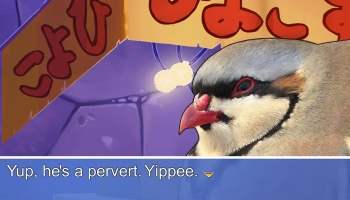 On a midday train through London, a pigeon hopped through the open doors and sat next to me for two more stops before departing the tube. That day I caught the avian flu and started looking for somebirdie to love. Little did I know there was a video game out there just for me.

Hatoful Boyfriend on a surface level is completely bizarre. In this visual novel, you play as the only human attending St. PigeoNation's, an academy of the pigeon, by the pigeon, and for the pigeon. It's your second year at the school, and with your best friend, the rock dove pigeon Ryouta, you're taking on the school year with renewed passion. Basically, you're going to find a birdie to love.

Over a long first day of school are introductions to the various birds. Hatoful Boyfriend gives players the option to display an illustrated human portrait for each bird in their introduction. Each bird has their own design, and in many cases the human design fits the bird portrait quite well. The mourning dove character, for example, is a melancholy freshman who keeps to himself.

Characters are diverse in personality. Among a hyperactive track team captain, a sleepy teacher, a flirt, an infamous doctor, a delusional bird who acts like he came out of a fantasy setting, and more, every birdie is different. Depending on which bird players pursue, the ending can be either hilarious (e.g. searching for the true pudding), forlorn, or - in one case - splendidly creepy.

Even the music gives a sense of different characters and situations. Stuck-up noblebird Sakuya has hoity-toity music while the very active Okosan has a high-tempo, high-pitched theme. Guitar, drums, and a piano combine for an epic song in a battle you will not expect. And you'll never think of "Dance of the Sugarplum Fairy" the same ever again.

Many dating sims struggle, or simply don't try, to make the main character interesting. Usually, these characters are blank slates onto which the audience projects. Hatoful Boyfriend does no such thing. Regardless of how you name your character, she will be daft, silly, and live in a cave that somehow has a doorbell. Hatoful Boyfriend is one of the few dating sims I've played where I cared about the main character as much as the characters I was trying to court.

There is only one way to get a game over in Hatoful Boyfriend -- pursue no particular bird. In traditional dating sim format, players will spend most of the time reading dialogue between the protagonist and the other characters and then selecting a choice between actions and dialogue. Advancing to the end requires selecting the options that will place you in proximity to the bird you're hunting and making them happy. On the first playthrough, it's difficult to know which choices correspond with each bird.

But this is a game that's strangely about more than the premise of dating birds.

Most routes hint that something fowl is happening at St. PigeoNation's. While the characters don't explicitly answer any questions for the player (that comes later), they hint at a story much larger than a human girl who gets her heart all aflutter. Why is there a bird school? Why does a human attend a bird school? Why BIRDS? Holy crap, are those buildings crumbling to the ground?

After completing certain routes, players can tackle the bird dating life again in a different fashion. The game starts like usual, but the protagonist changes later on. This isn't the wacky bird dating sim you came in expecting it to be. In this long route, the romance is ditched for a mystery that unravels what catastrophic event led to the destruction of humans and rise of the birds and the politics of this new bird-led world. This story doesn't come out of nowhere. It's subtly built up through the romance routes and hinted at in the archive section of the title screen.

Again and again I stopped for breaks, dumbfounded that such a silly game with puns and references to Pokemon could have depth. I suppose anything is possible.

Playthroughs aren't long. Players' first playthrough could take about as long as an hour, but a good chunk of that time is spent on the first day of school, sitting through introductions. This does become repetitive and makes playthroughs feel much longer than they are. A skip button allows players to quickly speed through text, but it is unable to tell what you have and haven't seen already, so it's easy to accidentally speed through a few boxes of text before you have a chance to click to stop it. If anything, I found the only time to use it and know for certain I wouldn't miss a new scene from a different route was for the character introduction sequence. A few spelling errors and typos also took me out of the game.

Hatoful Boyfriend first released a few years ago by manga artist and game developer Hato Moa. Devolver Digital and Mediatonic's version is extremely faithful to the original to the extent that I recognized pieces of dialogue verbatim.

Hatoful Boyfriend has a hilarious premise, and that's its best selling point. The game succeeds in keeping your interest and making these birds feel like real people. Despite seeing their bird portraits on screen, it's easy to think of them as human as any of us. The game has some annoyances to it, but a game that can make me cry over a damn fictional bird does a lot of things right.

Bottom Line: Devolver Digital and Mediatonic's Hatoful Boyfriend is a faithful upscale to the original game by Hato Moa and has the same charm and humor.

Recommendation: If you want a good laugh, love ridiculous characters, and aren't turned off by text-heavy games, flap those wings. Join the avian club.