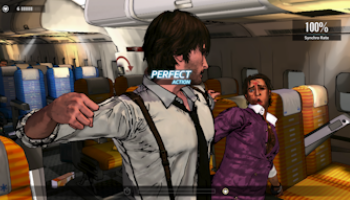 David Young is a former narcotics officer turned private detective, mourning the murder of his wife - Little Peggy - and on the case of a mysterious new drug sweeping Boston, Real Blood. He lives with a woman who thinks she's a cat, and works alongside Forrest Kaysen, a gluttonous detective with superhuman eating skills. Also, Young can travel back in time using magic objects called Mementos, and there's also a fashionista who talks to a mannequin. Oh, and a guy with a knife and fork ... and surgical mask.

Swery65, the mad genius behind Deadly Premonition, is back, and this time he's got a Kinect-powered take on the kind of game usually peddled by Quantic Dream.

Though D4 (alternatively known as Dark Dreams Don't Die) can be used with a standard controller, the game is quite clearly designed with Kinect in mind, and this is one of those few games in which I can say motion controls are the preferred method of input. The right or left hand can be used to guide a cursor on screen, while creating a fist with that hand confirms commands, be it moving David to a set location, interacting with an object, or selecting dialog choices.

Spiritually, this is a point-and-click adventure with some motion-controlled quick-time-events thrown in for good measure. Simple swipes of the arm will open doors or flip through paperwork, and some items can be pushed with a quick thrust of the palm. The gesture input is, on the whole, pretty damn responsive and does a fine job of doing what needs to be done. Every now and then, I had the cursor spasm and lose control, but not enough to ruin the overall experience.

D4 puts me in mind of Quantic Dream's recent output, with similarities to Heavy Rain or Beyond: Two Souls just begging to be made. As with the works of self-styled auteur David Cage, a large majority of the game is spent interacting with mundane objects, going through linear tasks, and chatting with supporting characters to solve a mystery. The major difference between D4 and those games, however, is that Swery65 is out of his mind, and as such, the narrative is a car crash of abstract comedy, bizarre NPCs, and sublimely ludicrous scenarios.

Comprising a prologue and two episodes (with more to come in the future), Season One of D4 takes place mostly on an airplane in which a drug courier is being transported to Boston. The courier allegedly disappeared on the flight, so David must travel into the past and find out what happened, meeting various suspects aboard the plane - from the neurotic woman who's convinced everybody's going to die, to the sneering business class attendant who seems possessed of unnatural strength. To solve the case, players will have to explore the environment, and can undertake optional missions that consist of hunting down objects or completing trivia quizzes.

With some deliciously over-the-top voice acting and utterly demented dialog, D4 is every bit as bizarre and laugh-inducing as Swery's prior cult classic, Deadly Premonition. There is an issue with some poor grammar in the subtitles, but otherwise this is quite the polished production when compared to previous Access Games releases, with a stylish cartoon-like visual style and a brilliant soundtrack that blends the cool with the camp. Very few videogames can strike me as genuinely funny, but where Deadly Premonition succeeded in making me laugh, so too does D4, though it does so with enough dark twists and plot intrigue to keep me eager as hell to find out what happens next.