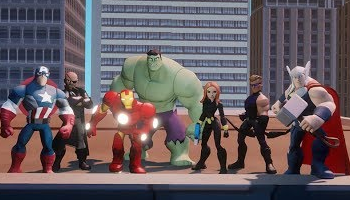 While interning at Walt Disney World back in 2004, I discovered the true power of believing in magic. Magic is real and exists in the minds of everyone as long as you have the key to unlocking it. Cast members were able to impart the experience of true wonder in children and adults alike simply by providing the tools needed to unleash one's imagination. Disney Infinity 2.0 seeks to bring these tools into the home, where the power of imagination can take flight, right from the comfort of your couch.

Disney Infinity 2.0 is Disney's latest foray into collectible toy gaming. It takes the same formula from 2013's Infinity 1.0 edition, revamping it into a more robust experience, while also correcting past mistakes and shortfalls. I outlined these in my Disney Infinity 1.0 review, which you can find here.

Infinity is the collectible love child of an action-adventure game married to sandbox world building. It includes physical toys with which to unlock unique story driven gameplay adventures, called Play Sets, and open world creation in a separate mode called the Toy Box. Characters, Play Sets and other features are brought into the game using figurines and discs with the included Infinity Base

Players can easily swap between characters and adventures or add items to their gameplay simply by swapping out what is on the base. It is this tangible nature that children will immediately connect with, allowing them agency in their gameplay similar to a complex game of make-believe. Adults will find the process a cumbersome, but worthwhile trade off if you fancy fantastically detailed plastic figurines gracing your desk when not at play. Otherwise, be prepared with ziplock bags of various sizes to organize your clutter-prone collection.

Disney Infinity: Marvel Super Heroes is one of two Infinity 2.0 starter packs available and forms the basis for this review - the second starter pack won't be available until November. Simply put, it's Infinity 2.0 reveling in the Marvel universe, which was recently added to the Disney empire. The starter pack includes the Infinity Base, three characters (Thor, Iron Man, and Black Widow), and the Avengers Play Set. Two additional Marvel Play Sets are available for Spider-Man and Guardians of the Galaxy, with corresponding character figurines, for fifteen characters in total. In the Avengers Play Set, you'll find yourself in a bite-sized Manhattan (The Manhattan Bridge Arch & Colonnade? Yes. Central Park? No.) with Loki on the loose, threatening to plunge its inhabitants into a deep freeze. You'll be expected to defeat his frost minions over (and over) and over again while you save the city from Loki's supervillain grip. For Spider-Man and Guardians of the Galaxy, you'll have to buy their individual expansions.

Adventures are pure fun, plain and simple. I caught myself saying "Wow!" the first time I soared through the urban sky on an endless network of Spidey's webs. Each adventure comes with roughly five hours of story-driven gameplay, with challenges and collectible game unlocks providing a seemingly endless challenge. Mix that with different characters, each with their own unique flavor and feel, and you'll find yourself plunging right into their capes, each imparting a distinct super hero flavor, coloring each experience.

While simple fun for adults, it is important to remember that adventures are built with kids in mind. Every mission has clear UI markers and indicators. If this wasn't enough to keep your tiny tot on track, mission givers will constantly, albeit annoyingly, remind you of your goals to keep you focused. With four to five hours' worth of structured gameplay, you will find yourself being reminded a lot. Mission objectives themselves can be somewhat repetitive, although increasingly difficult, allowing children to learn and grow into more complicated tasks within the adventure. The repetitive nature of missions will leave the game feeling bland for adults, so buyer beware if complex and varied gameplay pre-provided in the form of adventures is what you're after. But, that's where the Toy Box comes in.