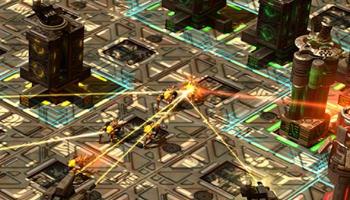 Defense Grid 2 developer Hidden Path has proven that you don't need a million-dollar Kickstarter project to make an amazing game.

After a fairly modest $250k Kickstarter ask, and finally funding at around $270k back in August 2012, Hidden Path has been hard at work making a follow-up to one of the Tower Defense genre's most highly-regarded titles. I invited Hidden Path CEO Jeff Pobst to a podcast recently, where we discussed the process at length, alongside former Escapist EiC Russ Pitts, who literally wrote the book on Defense Grid 2. What was obvious from our conversations, and immediately apparent on playing the game for a few hours, is that Hidden Path has the nebulous concept of "fun" down to a science.

Full disclosure: I'm apparently really bad at DG2. If you saw me streaming the beta, you'll know this to be true, but if you'd seen me playing the full game, it would be all the more obvious. I've resigned myself to playing on Easy until I get the hang of any given level, and you know what? It's still magnificently fun.

DG2 doesn't seem to try to do anything particularly new with the genre. Tower Defense is well enough established that there's not too much more you can do with it, at least not without drastically altering the experience. Where DG2 shines, however, is the distillation of the most fun elements of Tower Defense games, and the refinement of the less-fun aspects into more palatable bits. A great example of the latter is losing. I've lost more than I've won, but I continue to come back for more. The graph at the end of each attempt gives you a visual aid as to what you were doing, and where you may have gone wrong. Trying to reproduce your successful spikes, while trying to eliminate the point plateaus, is part of what gives DG2 the huge replay value it has. The "distilled fun" comes when you're speeding up time in game because you've set up your towers so masterfully, you don't even need to react to the incoming aliens. You just put it on fast forward, sit back, and watch the carnage.

The depth of DG2 is something to be lauded as well, with literally thousands of leaderboards, 10 towers, 21 campaign levels, and nearly 20 different alien types. There are also three multiplayer modes included in the roughly eight different Modes for every single campaign mission. Combine the several Mode options with four difficulties and three Type options, and it's easy to see how you end up with the number of leaderboards in the thousands. One particularly neat (in theory) feature is that you'll get to see your game graph alongside the selected player's so you can see where you went wrong, and shore up your defenses for that particular section of your next run. Of course, when exploits or broken mechanics are found, you end up with situations where the top player has, say, 800k points, while second place has 50k, which makes the graphs scale to the bigger number and hence largely useless.

Boost Towers are one of the more important additions to DG2, as they come with a variety of options to maximize their usefulness. First, they're cheap, so you can use them to direct traffic easily early on in the round. You can also build other towers on them, which is particularly useful for spaces surrounded by other towers, since they allow your gun towers and such to actually shoot over other towers. Once you've built a tower on top, you can upgrade the Boost tower itself as a Disruptor, which knocks out alien shields, making them significantly easier to kill; a Resource Boost, which gives you additional resources whenever the tower kills an alien; or an Overcharge, which increases the damage output of the residing tower. Realistically, one of the most satisfying parts of DG2 is watching your Disruptor at work, as once-shielded aliens are burnt to a crisp by a team of nearby Inferno Towers.