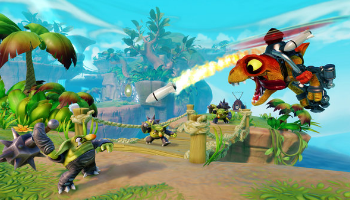 Nothing is more delightful than the excited inhalation and the wide eyes of a child as they interact with a newfangled toy. And no video game brings that joy on a more consistent basis than Skylanders. Like many grown-ass gamer adults, I disregarded the series initially but when my daughter reached an age where she could understand video games, Skylanders took on a whole new meaning. As I played Trap Team with her over the last week, my appreciation for all the designers did to appeal to both kids and adults skyrocketed. Trap Team is a wonderful expression of why video games are so important to our culture.

Refresher time: Skylanders is a third person action game that's played with a fixed camera across multiple levels. You move a character through a 3D world by defeating enemies with attacks, solving puzzles and performing feats of platforming prowess. The gimmick is that the character you control, the Skylander, is a digital representation of the physical toy you place on a USB peripheral called the Portal. The console starter pack comes with the portal and two Skylander figures, but you can buy other figures to play with in the game. Each of the toys is magnificently designed and communicates with the portal using NFC technology - you can level up the character in your game and that information is saved on the toy itself. The toys all have personalities that usually tie in with the element they represent - for example, Wildfire is a golden lion who confidently says "Bringing the heat!" when he's placed on the portal. Death is handled deftly; if your Skylander takes too much damage they are too "tired" to be used for the rest of the level and you need to swap in a different toy to proceed.

In Trap Team, you can also store the bosses and villains you defeat throughout the game into little plastic traps, and switch easily between controlling the Skylander and the villain. The villain doesn't have a health bar; instead you can only play with them for a limited time and taking damage just reduces that time. It's a sly system that enhances the gameplay and even allows a fair bit of strategizing and min-maxing. If your Skylander doesn't have a strong ranged attack, it's probably a good idea to use a trapped villain that does to balance it out.

The process of trapping the villain is achieved by putting a trap of the appropriate element in the slot in the Portal, and the sound of the villain's protestations smoothly travels from the TV speakers to the speaker on the Portal. Because the trap is clear plastic, there are also some lighting effects that flicker with the voice of the trapped villain. The clever design reinforces the magic of making imagination real. Plus, it helps that the villains are even crazier than the Skylanders, and provide tons of comic relief with funny asides as you play the game. This is one bit that kids love but starts to grate on the adults in the room after a while - having noise come from multiple locations in the room is neat but you'll soon turn the portal volume down in the settings to avoid too much cacophony.

The difficulty of the game starts off very simple but after a few missions it gets difficult enough to test the skills of even an expert gamer. Taking advantage of all of the elemental bonuses and effectively using the skills of the Skylanders you have is necessary if you want to get far in the story. The Skylanders have multiple, unique attacks and defeating enemies usually involves avoiding contact with them while delivering damage - similar to a shoot 'em up. The puzzles are expertly designed. It is tough to create something that's challenging without being frustrating and Trap Team's spatial puzzles all provide multiple ways to be solved. You can do it quick and dirty, or get bonuses by getting through it with style. That's actually true of the whole game, really. You can experience the story campaign without collecting all the bells and whistles in the many hidden areas, or you can pull your hair out trying to get that freaking hat. There's also a ton of extra content in the hub world of Skylander Academy like arena challenges and a memorable rhythm game.