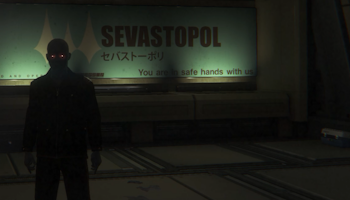 The beautiful thing about this experience is how it's consistently emergent. Very rarely do scripted scares ever occur. In one particular location, I stumbled upon a group of survivors blocking my path. I decided to throw a noisemaker into their midst, and watched as they panicked around it. I then hid in a closet and looked out through the viewing slots, just in time to see the Alien charging across the corridor in front of me. From offscreen, I heard gunshots and screams as the humans were slaughtered - all except one woman, who stumbled backwards in front of my viewing slot, firing offscreen, before the Xenomorph leaped back into view and murdered her. It was like something you'd see scripted in a film, but it's just how the game naturally played out, and it's full of moments like that.

The unpredictability works both ways. It can be brilliantly frightening, but also incredibly frustrating. You never know where the Alien may pop out from, and sometimes it can drop right in front of you, giving you no chance to escape (if it catches you, you ARE dead). When it's stalking the corridors, actively searching for prey, trying to avoid it is tense and nervewracking, but there's an exasperating quality in trying to avoid an invincible stalker that could turn around and spot you in a second, wanders with no pattern, and can never be outrun. At times, Isolation can be quite literally unfair, and more of a pain in the arse than a spooky experience.

The Alien also seems to "rubber band" with Ripley at times. When it's actively stalking, it always seems to be in the general vicinity of the player, no matter how sneaky one is in escaping it. It's as if there's a minimum distance the Xeno must be from Amanda, even if it doesn't make much discernible sense. At times like this, it feels less like the Creature is a living, predatory animal, and more like an "obligatory videogame enemy," which goes against the otherwise natural feel of the game's in-game events.

Still, if that's the price to pay for something this deliciously scary, then I'm happy to pay it. Even the archaic save system - a series of manually activated checkpoints that dotted around Sevastapol and are the only way to record progress - is able to make up for its own hassle. Yes, the save system means you can lose a lot of progress, but at the same time, the sense of relief when you reach one is palpable! And even saving a game is an invitation to feel paranoid - it takes several seconds for save stations to activate, and you spend the whole time worried that something could sneak up on you while you're stuck there. Save points even warn you if there are hostiles nearby, ramping up the tension even more. Nothing you do in Alien: Isolation comes without risk.

The save system in particular evokes feelings of classic survival horror games, along with equipment that serves as a double-edged sword, and weaponry that should be only employed as a last-ditch effort. Those looking for an easy ride, or an excuse to do some lootin' n' shootin', are going to likely be disappointed by the methodical pacing, emphasis on sneaking, and brutal opposition. This is a stealth horror game, through and through, and its commitment to that is bold and invigorating in the risk-averse "AAA" game industry. This is the kind of title you just don't see in the big-budget console space anymore, and I respect the hell out of that.

The audiovisual presentation matches the quality of the scares, and are crucial parts of building an oppressive atmosphere. What I love most is just how authentic everything feels. From the beige padded walls to the steam-spewing pipes and tubing that always looks like a Xeno in the corner of one's eye, everything in Isolation looks like it belongs right in the original movie's universe. Never has an Alien game tried so hard to look, sound, and feel like a real part of franchise, and never has one been so successful.

Lighting is stellar, especially in the game's handful of "outer space" sections, and while the Xenomorph's animations can sometimes look a little awkward, it's still a fantastic thing to see and hear in the flesh. The way it stomps down the halls, screams in frustration, and slides menacingly from holes in the ceiling, is just impeccable. Everything about it is designed to evoke panic with its sheer presence, and it's very good at what it does. Add to that a lovely soundtrack that holds up its end in the scare department (the discordant "tune" accompanying the Creature's first major appearance is pitch-perfect) and you have one very full package.

Alien: Isolation had me almost throwing the controller in a rage sometimes. At times I wondered what it wanted from me, as I tried to solve some weird environmental puzzle, or needed to take part in a hacking minigame, all while a slavering beast could grab me from behind at any moment. When I step back and look at what the campaign gave me over ten or so hours, however, I could only be impressed. Yes, there's some archaic stuff in here in terms of setup and pacing, but it all feeds into the same vein of survival horror. Nothing here is done by accident, and this calculating, near sadistic design has crafted something that I call, without hyperbole, one of my favorite horror games ever. Even without this being an Alien game, it's pulled off masterfully, and the fact it does feature my favorite antagonist in all of sci-fi is just a tasty bonus.

Sega, all I have to say to you directly is ... you're forgiven for Aliens: Colonial Marines. You earned it.

Bottom Line: Alien: Isolation can be frustrating, but it's mostly terrifying in a near-perfect way. The Alien is scarier than it's been since Ridley Scott first showed it to the world, and the atmosphere is thick enough to cut.

Recommendation: I won't lie to you about your chances ... but you have my sympathies.