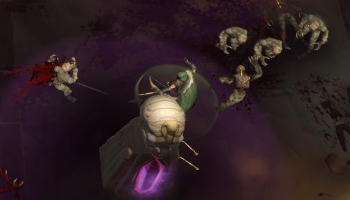 Gauntlet has always been about mindless hacking and slashing at wave after wave of enemies. Back in 1987, when it first left the arcade with its NES release, it was novel and it was glorious. Arrowhead's Gauntlet reboot is true to its source, probably too much so, which, as a big fan of nostalgia titles, is a little strange for me to say. The sad truth is that Gauntlet's gameplay was amazing in 1987, but it falls a bit flat two and a half decades later, when there are much more compelling gameplay mechanics in virtually every ARPG on the market.

That's not to say that there's not a lot to love about Gauntlet, however, as the updated graphics and advanced character-specific mechanics add some complexity to the otherwise-simple gameplay. There are once again four classes to choose from: Warrior, Valkyrie, Wizard, and Elf. Both Warrior and Valkyrie are melee classes, while Wizard and Elf are deadly at range. Each class has at least a couple of abilities, like the Elf's Bomb and Sniper Shot, which can be combined to launch a bomb a great distance and have it stick to whatever it hits before exploding. The Valkyrie gets a Shield Block, which knocks back enemies that hit you while it's active, as well as a piercing charge attack and shield throw for pesky ranged enemies. The Warrior gets his own charge attack as well as a jump attack that serves as his pseudo-ranged option. Finally, there's the wildly complicated Wizard, who gets nine spells to tinker with, and a seemingly impossible-to-memorize scheme for actually casting them. Where every other class just requires you to tap a button to perform an ability, most of the Wizard's spells require a series of button presses to activate, making him more of an expert-level character, and probably the most powerful, assuming you know what you're doing.

The diversity of the classes definitely earns Gauntlet some points, but the game's combat system strongly favors the Elf over all. Both melee classes are incredibly hard to play right, since you're easily surrounded, and they don't seem to be able to take any more hits than their ranged counterparts. The Wizard's abilities are obtuse and hard to use - spells consist of a sequence of button presses - and pressing the wrong button during a three-button series will get you killed more often than not. The Wizard is probably the most powerful class in the game, but it's not a beginner-friendly class by any stretch.

The Elf, on the other hand, simply wanders around and murders everything at range. Your regular bow shots can take down a steady stream of enemies without them ever getting close enough to hit you, and your Sniper Shot will let you knock out larger enemies when they join the fray. If you get overwhelmed, the Bomb has a huge AOE blast, which instantly kills most enemies while inflicting serious damage to anything that survives. The monster-spawning portals are immune to your regular bow shot, but you can still keep your distance by combining Bomb and Sniper Shot, whittling down the portals and clearing out swaths of enemies in the explosions. He also has a dodge roll, which allows you to move through enemies and out of harm's way. The Elf is definitely the easiest class to pick up and play, but it's just as easy to get burned out because of how easily it seems to breeze through bad guys.

Despite the glaring inequity of the classes, Gauntlet is still a blast to play with friends in short bursts, assuming you're not all fighting over the Elf. The local co-op works much like the online co-op, with up to four players vying for loot, food, and potions while trying to stem the endless tide of bad guys. Melee classes are significantly more viable when they have an Elf to back them up in co-op, and the Wizard is still incredibly hard to use effectively.

Gauntlet can be played with a gamepad or a mouse and keyboard, but as the game indicates, it is much more fun to play with the former. The mouse and keyboard controls are tolerable, but the joysticks on the gamepad, and the easy access to the various ability buttons is definitely a more generally pleasant experience, than WASD movement and mouse targeting.

At its core, Gauntlet is incredibly Gauntlety, but it does little to set itself apart from more fleshed out titles in the ARPG category. The Relic system is a fun addition, with each relic basically offering a special ability for you to use, but doesn't add nearly as much depth to the game as the gear systems in place in most comparable games.

Bottom Line: Arrowhead made a very true-to-source Gauntlet game, no doubt, but the source is 30 years old, and could use some modern accouterments. Gauntlet is as much fun as it has ever been, but it'll get old fast for those who still remember slogging through the original.

Recommendation: If all you want is to play some classic-style Gauntlet, then this is definitely where you want to be, but if you were hoping for something more, it'll leave you wanting. $20 is a great price for what will certainly give you a few solid hours of entertainment, but Gauntlet is not much for depth of experience.