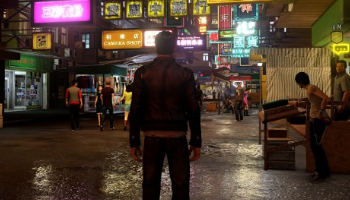 Sleeping Dogs was a pretty good game. I don't consider it the second coming of Christ like some reviewers did when it first released in 2012, however. Its inventory system was insensibly restricted, its combat felt stodgy in comparison to the fluid systems it was aping, and the story failed to do much for me with its fairly paint-by-numbers structure. Still, it was gorgeous, had some terrific driving controls, and the unique Hong Kong setting lent it a flavor missing from most "me too" action games.

Square Enix, having already double dipped this year with Tomb Raider: Definitive Edition, is back with another attempt to squeeze fresh cash from an old game, imaginatively titled Sleeping Dogs: Definitive Edition. Unlike with Tomb Raider, this title's at least a bit older, and had so much downloadable content vomited out around it that a release tying everything together has some merit. Still, this is ultimately yet another rerelease in what's turned into a year of them.

Sleeping Dogs is the story of Wei Shen, an undercover detective insinuated in the Sun On Yee Triads. Posing as a criminal, players undertake various missions for the Sun On Yee, as well as tackle police cases on the side and partake in the myriad distractions now typical of a modern open-world game. Those familiar with sandbox crime games get everything they'd expect - some shooting and melee fighting, carjacking, police chases, tailing missions, etcetera - while there's a ton of extra content to keep things spicy in between, from hacking CCTV cameras and busting drug dealers, to street racing, to simply unlocking new clothes and making Wei Shen look ridiculous.

Post-launch, Sleeping Dogs was "supported" with six months of downloadable content, from the cosmetic to the expansive, and it's this bucketload of material that makes the Definitive Edition worth looking into. In total, there are 24 pieces of content added to the game, all previously available as purchases for the original version. Simple outfit changes make up a lot of them, with new costumes for Wei Shen - some of which alter his stats and make him more powerful or durable. There's also a bunch of vehicles available to collect, including the delightful Nimbus-inspired superbike. Most of this content is available for Wei Shen to buy with in-game cash, or otherwise found in parking lots and his apartment wardrobe.

The three main story expansions are also included, accessible from the main menu. Nightmare in North Point is a horror-themed expansion, drenching Hong Kong with an eerie blue glow and pitting Wei against bouncing jiangshi vampires and demons. It's an utterly ridiculous little adventure that, while quite funny, is pretty light on stuff to do and doesn't really go anywhere. Zodiac Tournament tosses Wei Shen into an underground fighting league and provides a new environment, while Year of the Snake, possibly the best of the bunch, has Wei Shen as an honest police officer trying to stop a group of crazy terrorists. The expansions add some extra hours to the game, and they're all quite silly.

In the transition from PS3 to Xbox 360 to current consoles, Definitive Edition renders Hong Kong in glorious 1080p, though outside of that, visual improvements are difficult to ascertain, especially if you've already experienced the impressive PC version. As someone who has played Sleeping Dogs on PC already, I can't say I was exactly blown away by the way Definitive Edition looks on Xbox One. It's still remarkably pretty stuff, but at 30 frames-per-second and very little edge over the previous computer release, I'm just not feeling like the upgrade's worth it.

Make no mistake, if you've not played Sleeping Dogs before, then this is certainly the version to get. The value comes in the downloadable content, however, and if you already spent your vast wealth acquiring it all for the last generation release, then there's simply nothing worth getting excited about here.

Considering the fact I've only just broken the 500 word mark and I'm already struggling to find interesting things to say about this release, suffice it to say that Sleeping Dogs: Definitive Edition is not a revolutionary remaster to any degree. Aside from some inconsequential tweaks (Square Enix boasts of "refined" gameplay, but it still feels like the old Sleeping Dogs to me), there's very little difference between this and one of those "Game of the Year" releases publishers like to pull, where they rerelease a game with all of its downloadable content a few months after the original launched. That's more or less how this one ought to be looked at.

That much is evidenced when you consider how buggy this is. During the course of playing through the main campaign, I had the game hard crash twice, and I had to restart the a mission from checkpoints twice because of physics glitches that caused Wei Shen to become stuck and unable to interact with the world. As well as that, a number of environment clipping issues and graphical bugs made themselves more than obvious throughout. I like to think that if you're going to ask for a second payment on a game you've already sold once, the least you could do is fix what's broken, especially when the breakages are this regular and hard to miss.

Bottom Line: Still a very good game, but it's on the more pointless end of the rerelease spectrum, and they really should have fixed those bugs.

Recommendation: You look like you could use a pork bun!