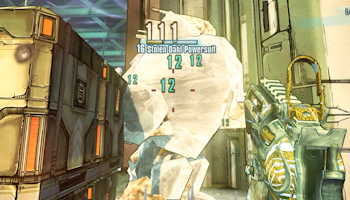 For the most part, The Pre-Sequel is just another Borderlands game, with all the good and bad that entails. This particular installment does try to shake things up, however, with Elpis and its unique environment. Being a Moon, a vast majority of the game's areas feature reduced gravity, punctuated with domes of atmosphere where physics behave as normal. A new piece of equipment - the Oz kit - provides each character with oxygen, replenished at outposts or interiors with an atmosphere, and expended while out in the field (unless you're Claptrap). There are enough pockets of oxygen where running out really ought not to be an issue, though it does make players more aware of their surroundings.

Oxygen can also be expelled to gain extra height and length in jumps, allowing players to float a little and cross large gaps, or leap high into the air and then stomp down with a new attack - the colloquially named Butt Slam. Each Oz kit has its own properties, allowing for more or less O2, and even adding elemental effects to the Slam, which I quickly fell in love with as an effective crowd-clearer and infinitely superior attack to the basic melee smack.

Another fun new addition is the Grinder, a machine in the hub city of Concordia that lets you toss in three guns from your inventory, and combine them to form a new one. This is a great way to turn blue-grade weapons into rarer purple-grade ones, and some truly interesting new loot can be scored. Given how useless cash becomes in these games, it's a great alternative to selling one's equipment.

New vehicles are also available on the moon, with a space buggy that behaves similarly to previous games' vehicles, and the Stingray, a one-person hoverbike that can levitate itself and provide its own slam attack. Stingrays are certainly fun to use, and feel pretty essential when dealing with some of Elpis' environments.

Map design has never been Borderlands' strong suit, to be honest, and that issue has been exacerbated by The Pre-Sequel's fascination with verticality. There's more platforming this time around, with boost pads and large chasms dotted all over the place. Sadly, some of these chasms really aren't signposted very well, and jump pads don't always take players where they should go, leading to me falling to my death here more than either of the previous installments. With a lot of levels featuring more layers than before, finding objectives can be a hassle, while the exterior sections are crammed with rivers of lava and other instant-death hazards that just aren't very enjoyable to navigate.

While we're on the negative side of things, it has to be reiterated that, even with the new setting and handful of fresh toys, The Pre-Sequel truly is just more Borderlands. This means you get the same loot-hungry compulsion to play, but also the same exhaustion in fighting the same bullet sponge enemies over and over. You get the same moments of genuine referential wit that can make you laugh out loud, but the same moments of desperation where limp fart jokes or overacting screams are used in place of an actual gag. Of course, if you're obsessed with Borderlands and can't wait for more, this is all good stuff. If you might be feeling tired of the same old game, the lack of active improvements to the structure and design might make this a case of one release too many.

Personally, I still have room for more Borderlands, even if I'm a little less impressed each time I see it. With other loot-driven first-person shooter games failing to scratch my itch for increasingly powerful guns, The Pre-Sequel has arrived at just the right time. Just be aware that, more than likely, your co-op experience will very likely consist of four Claptraps rolling around.

Oh, and some sensitive nice guys are going to hate the "friendzone" joke, but I laughed.

Bottom Line: Borderlands: The Pre-Sequel is a funny cartoon shooter that compels you to keep playing and score more guns. Just like the last two. Laser weapons and moon bouncing add a little extra flavor, but if you don't like Borderlands by now, this won't change things.

Recommendation: If more of the same sounds just dandy to you, this is as good as it ever was.