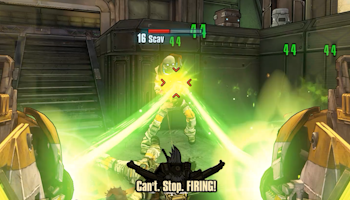 What do you do when you have a terrific one-shot villain and you need more of him? It's time for a prequel! I'm willing to guess that the chance for more Handsome Jack was a big motivator in the decision to create Borderlands: The Pre-Sequel, a game set between the events of Borderlands and Borderlands 2. Showcasing Jack's rise to power from low-level programmer to Hyperion Corporation overlord, The Pre-Sequel has made a damn fine call in giving us more of one of gaming's most sarcastic antagonists.

Presented as a flashback tale relayed by the mercenary Athena, The Pre-Sequel's action takes place predominantly on Pandora's moon, Elpis. Here, the yet-to-become Handsome Jack unites three vault hunters - the aforementioned Athena, the cybernetic Wilhelm, the gunslinging Nisha, and a customized Claptrap unit - in a bid to stop the zealous Lost Legion from destroying everybody who calls the moon their home. Apparently there's a lot of people there!

As one might expect, the story is packed with humor, with Jack once again providing the majority of the laughs, even with his more sympathetic characterization. The Jack of The Pre-Sequel is still a definite asshole, but he's portrayed as willing to place his life on the line and get stuck in with the fighting, and his gradual acceptance of a more sadistic way of doing things is amusing - and somewhat disturbing - to witness.

For reasons unexplained, Elpis is where everybody with an Australian accent lives. The usual voices one might expect from Pandora's raiders and psychos are now replaced with soundbites picked fresh from the Commonwealth, and there's all sorts of referential Aussie humor for those learned enough to know their billabongs from their jumbucks. While I miss the usual cries of "Salt the wound," the aural changes are entertaining in their own right, and help give Elpis its own flavor. That said, the coincidental fact that a bunch of characters from previous games all happened to be on the moon at the exact same time - including such unlikely players as Moxxi and Crazy Earl - feels a little bit like a creative crutch.

That said, we get our four fresh vault hunters, each with their own specializations and playstyles. Athena the Gladiator is a tanked up fighter, able to fling her shield like Shaptain Shmamerica. Wilhelm is the "pet" class, with a pair of bots that generate defense and offense, while Nisha specializes in dealing straight damage and can use a whip to tear foes up. The star of the show, however (and likely to be the most overused character ever) is Claptrap the Fragtrap, whose action skill is ostensibly a gamble. By assessing various factors (health, enemies present, ammo count), Claptrap can pull from any number of weird abilities when his action skill meter is full, able to transform into a pirate ship, summon a gigantic bomb, or create a tiny flying minion that deals fire and corrosive damage. He is undeniably a lot of fun, even if you hate the little thing.

As always, each character can pick from three skill trees apiece when they level up, spending points to further customize their classes. Stat boosts, new action skills, and rewards for kills are all unlocked in these trees, allowing players to find a playstyle with a playstyle. This is further helped along by class mods - equippable items picked up as loot that can tweak stats even more. I personally went with a Claptrap (naturally) that acted as a support, using a range to skills to heal and buff not only himself, but any cooperating players that might drop in. As a fan of support/healer classes in general, it's nice to see a really good one present in the Pre-Sequel.

It wouldn't be a Borderlands game without loot, and once again there is a ridiculous amount of weaponry to be picked up, from rocket launchers to shotguns to sniper rifles, each with their own elemental effects, statistics, and rarity levels. One brand new gun type has been introduced on Elpis, the laser, which can come as either a shotgun-like blast variety or a concentrated beam. The beam type is an absolute beast in combat, able to provide fire at a ridiculously consistent rate, especially if you find one that deals more damage the longer you keep it firing.

Beam weapons are fantastic, but they're so powerful that I've found myself generally unwilling to use anything else in a fight. For as long as I have laser ammo in the bag, that's all I care to use, with all the other gun types being firmly upstaged.

Joining the laser is a new elemental type, ice. Ice weapons behave pretty much as you'd expect them to - where electricity damages shields and corrosion chews through armor, the ice element freezes opponents while dealing damage, and may cause the trapped enemy to shatter if you keep pressing the attack. Unlike with laser weaponry, the ice element doesn't overshadow the other elements quite so much, fitting quite nicely into the repertoire.