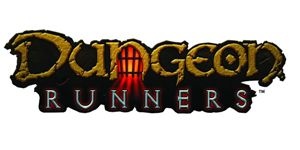 With StarCraft 2 announced and World of Warcraft flourishing, Blizzard's Diablo franchise is the only one of the Big Three that's long in the tooth and due for a sequel (save for Rock N Roll Racing diehards, and I feel your pain, brothers). The Diablo model - click, kill a lot of monsters, level up, run to town to sell your loot - is perfect for an MMOG, and someone was bound to try it with Blizzard distracted with the monster it unleashed. NCsoft's Dungeon Runners is the latest try for a 3-D Diablo, but DR puts it online, with hundreds of players in a particular world at any given time, and most importantly, drops the price way, way down. Dungeon Runners is free to play, with a low price subscription providing several neat, but not essential features.

And that's not "free to play," like "you have to pay $50 for a box," or the Korean model, where you're pretty much useless unless you shell out megabucks for in-game loot. Instead, a Dungeon Runners subscription nets you several very handy features - access to the most powerful tier of items, login queue priority, a bank vault for stashing loot and potion stacking - for $5 a month, while keeping the game decently playable for those unable or unwilling to subscribe.

The game itself strips down MMOG gameplay to its most basic form, combining it with the Diablo model for maximum effectiveness: Kill things, and you get money and loot. There's no wrapper story about saving the world, and while the quests have the usual flavor text, it's easy to ignore. In fact, the whole game is so casual it routinely flirts with genre parody. Your character title will wind up being something like "Spirited Noobie Obsidian Mage," sporting the "Distant Baby Seal Skin Armor of the Hawk" and wielding the "Repenting Cardboard Small Club of the Bunny" (Attack Speed: Freakin' Fast), all while visiting Townston to assist the locals with their monster problem. The voice acting ranges from normal to downright silly ("I've got an eagle eye," says one Ranger trainer. "It's in this pocket.").

Dungeon Runners occasionally feels like something made in a weekend - not in terms of quality, but in terms of feel. It feels like something a group of friends would put together for their buddies in a mad weekend of creativity, built with an NCsoft budget. It's a nudge and a wink for experienced Diablo and MMOG players, an elbow in the ribs saying, "Hey, just between us, we know nobody cares about the story. All we care about is killing things, taking their stuff and leveling up, right?" 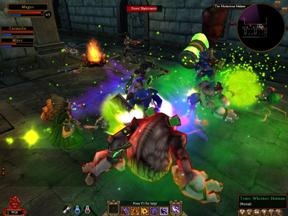 While there are three classes - Fighter, Ranger and Mage - it's easy to cross-train skills for the right price, and there's very few restrictions on what is possible with a character. Mine could shoot lightning bolts and hurl fireballs with the best wizard, all while wearing hilariously oversized plate armor and flailing away with a two-handed claymore that would leave William Wallace wondering about his manhood. The game's instances can also be reset, and a lot of quests can be repeated. So, for example, if you're farming easy monsters for big quest rewards and clear an area, it's simply a matter of right-clicking "Reset Instances" on your character portrait, and everything comes back. The entire game feels streamlined, designed to minimize the screwing around in town downtime; better to spend time frantically flailing away in combat, be it in the monster-strewn overworld, or in the numerous dungeons strewn about, packed full of loot that's just waiting to be ferried off.

If there's a downside, it's that the game's laid-back nature and casual play don't quite deliver the hook of the traditional titles in the genre. The combat is engrossing, to the point that "Can't talk, dungeon running" was my away message and snapped reply whenever someone came to talk to me, but there wasn't anything that dragged me back into killing monsters time and again. As much as it pains me to say it, Dungeon Runners may actually be too low-key, in that you'll have a perfectly enjoyable time when playing the game and killing things, but without the quests or the "Kill Diablo, save the world" storyline, there's little incentive to come back time and again, aside from a few minutes of stress relief here and there. Logging in to mow down hordes of monsters has a visceral thrill, but without the visible endpoint or "winning," there's little reason to climb back on the treadmill.