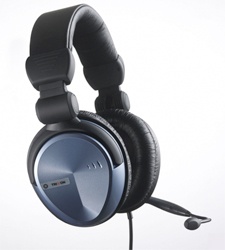 I'm a total sucker for any affordable piece of equipment that might possibly enhance my gaming experience. Hence my recent purchase of Tritton's AX360 gaming headset, which promised to deliver a genuine high-performance, 5.1 surround-sound experience in a deceptively conventional-looking package. As a late-evening gamer, I rarely have the luxury of cranking up my home theater speakers, so at $120 I figured they'd be worth a shot.

First things first: Can a headset with two earpieces reproduce bona fide 5.1 surround sound? In short, yes, at least to a point. Tritton built the AX 360's with four separate speakers in each earpiece, and they've somehow configured them to provide fairly convincing impressions of front, side, and rear sound sources. The sense of positional sound isn't as convincing as a standard 5.1 speaker setup, but it's surprisingly close, and it's dramatic enough to provide a real departure from simple stereo output.

On the PC, I tested the AX360 with Half Life 2: Episode I and F.E.A.R.. For the Xbox 360, I played Gears of War, Viva Pinata, Project Gotham Racing 3 and Rainbow Six: Vegas. In every case the difference between conventional stereo headphones and the AX360's 5.1 output was quite pronounced, although some games fared better than others. The AX360's primary drawback is that it can't quite provide a completely convincing sense of rearward sound. As a result, in PGR 3 the sound of rival cars approaching from behind left a bit to be desired. In other games, where the soundscape was less linear, the limitation wasn't nearly as obvious. The AX360's other main drawback, at least in terms of the 5.1 experience it offers, is that its separate speakers don't quite sound identical. The front speakers, for example, seem to deliver richer sound than the rear and center sets, so the sound quality changes slightly as it pans from one speaker set to the next. It's subtle, but still apparent if you pay close attention.

As you'd expect from a Dolby Digital and Pro Logic certified headset, the AX360 offers good sound quality, though I wouldn't describe it as stellar. I experienced some very slight background noise and odd, barely audible beeping/clicking sounds, but neither were troublesome when I was actually playing a game. The headset's bass response is underwhelming, perhaps because most of the subwoofer channel is directed to an ultra low-frequency rumble feature apparently designed to mimic game controller vibrations. I could only activate the feature when I cranked the headset's "Vib" dial, which is situated on the headset cord, up to 10. At that setting the woofy, rattling bass tones began to drown out the rest of the range. A simple subwoofer volume control would have been a much better choice.

On the plus side, the AX360s's lengthy cord also includes separate inline volume controls for front, rear and center speakers. I actually found the ability to tweak the volumes for each speaker set to be essential in creating a balanced, believable soundscape. My only complaint is that the volume control labels can't be read in dim light.

Although the AX360 is marketed primarily as a 360-compatible headset, its amplifier unit will accept a 5.1 digital signal from any coaxial or optical digital source. In fact, one of each source type can be connected to the amplifier at the same time and selected via a two-position switch.

The amplifier unit includes a single set of 5.1 analog output jacks and a master volume control. It also provides Dolby Pro Logic upconversion of two-channel signals to simulated 5.1 surround sound, and optional dynamic range compression to boost lower and limit higher frequencies. It even features a time delay function that allows users to tweak delays to the center and surround (rear) channels. Unfortunately, several of these features share the same buttons and can only be enabled after configuring a few additional switches. It's a bit of a hassle, and the accompanying documentation isn't especially helpful.

The AX360 has a great microphone (your trash talk never sounded so clear), but Tritton choose to attach it to a flimsy rotating clip on the left earpiece rather than integrate it into the headset. At the end of the mic is a standard 2.5mm plug that connects to an extension cord via a fragile-looking wire, which then plugs directly into jack on the 360 controller. The cord doesn't include a mute switch, so if you need to yell at the dog, argue about TV set usage with your significant other or otherwise generate noise your online associates might not want to hear, you'll have to unplug the mic.

The AX360 doesn't accept in-game voice chat audio from the 360 controller, so in order to enable in-game voice, you have to open the "personal settings" section of the Xbox 360 dashboard and set the "play through both" speakers/headset option for voice output. And because the AX360 doesn't have a manual voice chat volume control like the 360 headset does, you have to adjust voice volume in the dashboard and balance it with the game volume. In short, voice chat's a bit of a pain.

Using the AX360's microphone for PC gaming can also be complicated. If you're running your PC audio through the AX360 amplifier unit via digital coaxial or optical input, you can plug the mic extension cord directly into your PC microphone jack, provided you have a 2.5mm to 3.5mm adapter (not included). If you're bypassing the amplifier and connecting to your PC directly with the included 5.1 analog headset cord adapter, you don't need an extension cord for the microphone. Instead, PC microphone connectivity is integrated directly into the headset and cord. The aforementioned clip-on microphone plugs directly into a jack on the left earpiece, and its signal travels through the main headphone cable to a standard 3.5mm plug at the end of the cord. Of course, to take advantage of the microphone and full 5.1 surround connectivity with the adapter, you'll need a soundcard with a microphone input and front, surround and center/subwoofer analog jacks.

In terms of construction, the AX360 seems reasonably well-built. The ear cups enclose your entire ear, and they rotate and pivot to provide a very close, comfortable fit. The headset is heavy, but not overly so, and the headband is covered with a soft, faux leather covering that looks and feels good. Even though its gun-metal blue finish doesn't fit with the Xbox 360's white aesthetics, the AX360 still has the look and feel of a premium set of headphones. It also folds up nicely. Tritton includes a velvet drawstring storage bag, apparently to dispel any notions that the AX360s might be anything but a serious audiophile product.

There's no disputing that the experience the AX360 offers is richer and more immersive than that of any stereo headset. Still, it's a shame it doesn't include a fully integrated microphone or mute and volume controls for voice chat. If you're willing to overlook these and other minor shortcomings in order to make the leap to 5.1 surround gaming, you'll appreciate the difference. If you're a hardcore audiophile looking for the perfect 5.1 surround Xbox 360 headset, you might want to keep on looking. The AX360 gets the job done, but for the perfectionist its flaws might stick out like a sore thumb.