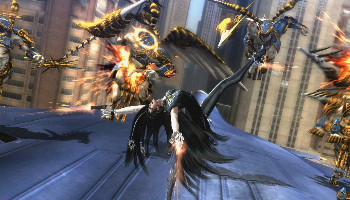 Bayonetta 2 has opened the door to the same kind of debates the original kicked off, and I consider that a positive thing. That this series - ostensibly one of the most ridiculous pieces of interactive entertainment on offer - can be part of conflicted, nuanced debate is something Platinum Games ought to be proud of. Whether you find Platinum's offerings tasteless or affirming, I don't think any of us can deny it's the nucleus of fascinating debate.

Personally, I find Bayonetta so perfectly outrageous that it gets away with its gratuitous behavior, and Bayonetta 2 only amplifies the absurd tone. Let's make no mistake - this is an absolutely stupid game. Its narrative is nonsensical, its characters outlandish, its visual style preposterous. Madness upon madness is piled high upon a foundation of watertight, florid combat, and I honestly wouldn't have it any other way.

The titular Bayonetta is up to her usual tricks, battling against angels because she's a witch, and witches do that for some reason. As I say, the story is basically gobbledygook, but it delivers itself with such absolute sincerity that one buys into its outlandishness without much effort. Sure, that's a headless red man with wings who speaks out of a giant baby's face on his sword, and I'll roll with that because Bayonetta 2 is confident enough that it makes sense. It's an audacity I've come to admire in many a game committed enough to sell me nonsense, and if Platinum's committed to anything, it's nonsense.

The original Bayonetta had a damn fine combat system, but everything in the sequel feels improved and finely tuned. Superficially simple, the system of dodges and combos that make up an average fight is often rewarding in its hidden depth, with a sense of timing and an openness to experimentation providing plenty of payoff. Dodging an enemy attack at the right moment activates Witch Time, slowing down the surroundings and allowing players to pull off moves with a reduced fear of reprisal. Bayonetta uses both her arms and legs - mapped to separate buttons - to attack, and combining them creates an array of extravagant special maneuvers. Enemies are thus dealt with through a tricky dance of ducking and weaving, landing dazzling counter-strikes with every open opportunity.

Despite its inherent challenge, Bayonetta 2 is great at making even newcomers feel good. It's impossible to not make Bayonetta pull off awesome moves even if one's just randomly smashing buttons, and of course those who master her abilities will be able to pull off progressively more impressive stuff. While the unskilled will get through the game - with more ease than they could with the original - one achieves higher rewards for quickly disposing of opponents without taking damage or using items. Each fight is graded, on a scale of stone to pure platinum, and one will have to get good if they wish to feel special. Like with the first game, it's a very pleasant system that encourages improvement rather than overly punishes the less skillful.