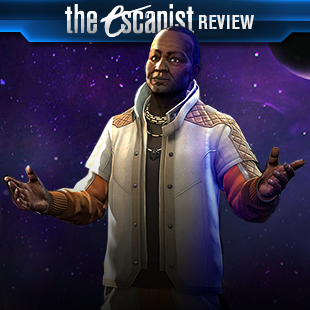 In the Civilization series that bears Sid Meier's name, you have to make a lot of decisions: Where to plant your first city, what to build first, where to move your soldiers, whether you should attack your neighbor. Meier famously believes that all game design is about creating interesting decisions for the player. Civilization: Beyond Earth was made by Firaxis under the tutelage of Meier's philosophy as players colonize a new planet around 250 years in the future and must contend with other human factions and a hostile alien environment. Unfortunately, the myriad of new decisions you have to make in Beyond Earth become uninteresting far too quickly, at once paralyzing you and forcing you to mark time in annoying ways. Thankfully, the game is still enjoyable for a Civ fan even if it is flawed.

Despite the wonderful emotional hook of the introductory cinematic, the story set-up is rather slim and you have to infer a lot of it. Humans as a species have discovered the ability to travel to a distant planet to set up shop and they all launch their spaceships at roughly the same time to land on the same planet. The human groups and their leaders have notes of known cultures, such as Elodie from Franco-Iberia and Hutama from Polystralia, but other than their accents there's not much character differentiating them. You found a city on a new planet and use that city to construct military units, buildings which provide permanent bonuses to your faction and support units such as satellites and workers to improve the harsh landscape. The action is turn-based, so you have ample time to decide how you want to move your units on the hex grid before the other factions and the aliens take their turns.

When you start a game of Beyond Earth, you are immediately forced to make a series of decisions that make very little sense to a novice Civ player. You are ostensibly kitting out the spaceship you're launching from Earth to colonize a new planet by choosing your faction's culture and what equipment you are bringing along. It's easy to see that choosing a weapon arsenal will get you a free soldier unit when you found your first city, but it's difficult to know whether that will be important or not without know the situation on the planet. These choices are a way to differentiate each playthrough from another, I suppose, but I found myself frustrated because I had no idea what impact it would have on my game. A good general or leader uses the information available to decide what to do, and I felt I was forced to make important decisions in a vacuum just to see what happened.

Once you do get to the new planet, it's clear it doesn't like you much. There are alien units prowling around which will attack your units and your city on sight. There is a green gas miasma infecting some of the hex tiles around your city which damages your units if they end their turn there. The early game in Beyond Earth is harsh, and new players will have to adapt quickly if they want to survive. The game does a pretty good job of guiding you through with an effective tutorial and hint system, along with a series of quests that introduce certain concepts. There's a quest to investigate a nearby crashed satellite with your explorer unit and set up an expedition there, introducing the idea that you can, you know, do that. There's a quest to kill a huge siege worm, a task that is very difficult without strong tactics or advanced units, but it reinforces the concept that aliens can be harvested for resources if you're OK with that. The quest system is extremely minimal, with text and some simple choices available, but it does help in structuring the game experience a bit.

The technology web could have used some of that structure to make it easier for players to understand. In other Civ games, you progressed generally in a line through the ages, but in Beyond Earth you have the ability to choose to research one of seven techs right from the start. The technologies are shown in a connected circular web, with more important "branch" techs above more specialized "leaf" techs, which allows for some cherry-picking the techs you want. Allowing progression to occur organically is a great design feature on paper, but in practice it is easy to feel paralyzed at how to proceed. With so many new concepts and make-believe terms to become acquainted with in the science-fiction setting, information overload becomes a real problem. It all starts to read as scientific mumbo-jumbo after a while.

Affinities are a nice addition to the mix, though. You can level up your faction in the three philosophies of Harmony, Supremacy and Purity, usually by choosing certain technologies but also through quests. Advancing your faction in Supremacy, for example, means your people are comfortable with assimilating technology such as cybernetics into their bodies, while Purity stands for keeping the human genome and way of life intact even on an alien planet and Harmony is all about coexisting with the alien life there. The three philosophies feel real and grounded in something that would actually occur if humans were forced to survive in a harsh environment. As you gain levels, your units become more powerful but you also gain specific bonuses such as making explorers immune to alien attacks. It is also interesting to see how the opposing faction leaders will choose to adapt on the new world. The first time you encounter General Kozlov of the Slavic Federation who has adopted Supremacy, for example, you'll know it from the glowing eyes and cybernetic implants on his head. It's creepy.