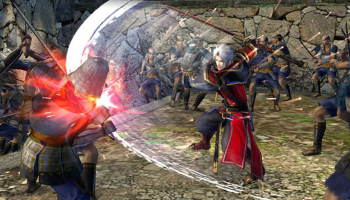 Stages themselves are more varied, littered as they are now with both story and optional objectives that regularly pop up during the flow of the fight. Most objectives are simply a case of locating and killing a particular enemy, but can include reaching certain destinations or taking out a number of regular soldiers. Having so many objectives to complete is neat, though I do wish the game wouldn't pause every time a new one pops up, as it can get increasingly annoying.

Stages are now fought with two playable characters as opposed to just one. While you're playing, the secondary character moves autonomously (though they can be given simple commands) and may be switched to at any time. Switching characters is a great way to gain ground on the map, should one warrior be closer to an objective than the other, and they can of course be brought together to combine strengths and pull off a double musou.

As well as new weapons (all of which can be upgraded and smelted down for parts) and mounts, characters can now be equipped with a number of items that allow for one use per stage. Simple healing items and temporary stat boosts are all in attendance, as well as consumables that add elemental effects to attacks, or give every enemy a 25% chance to drop extra experience. The EXP drop item is brilliant, allowing you to take a new character and Hyper attack your way through scores of peons for some quick early level-ups. Rare is the battle where I don't start off doing that.

Fans of Create-A-Warrior will be thrilled to know that it has returned, allowing players to build their own characters and take them through a new, RPG-like Chronicle mode. Character creation isn't exactly as deep as what you'd find in The Elder Scrolls or Saints Row, but it's been overhauled, allowing creative types to twist and pull preset model types and enjoy a greater sense of customization. New clothing and weapons for these characters are unlocked in the aforementioned Chronicle mode, which joins the regular Story and Free modes.

There is online co-op, but for some reason Omega Force insists on using an archaic and unhelpful system for finding players. As with previous online Warriors games, you choose your stage first, and then hope somebody online is playing the same stage and looking for cooperative help. It makes finding partners without planning ahead of time an unlikely crapshoot, and I cannot for the life of me work out why they can't just employ a quick match system. I don't really care what the stage is, just find me a damn partner and I'll make it work.

I'm also somewhat disappointed by Tecmo Koei, again, using Japanese voice actors only. I realize the original dub has its fans, but for me, I find battles harder to follow when I need to read everything being said while attempting to fight thousands of soldiers at once. For a series that's frequently (and sometimes unfairly) accused of laziness, encouraging those criticisms by cutting corners in the presentation department strikes me as counterproductive.

At least the rest of the presentation is good. With hundreds of characters onscreen, and this time around a distinct lack of pop-in or slowdown, Samurai Warriors 4 isn't the best current-gen game you'll find, but it's smooth and colorful and far from ugly. Character design is top-notch, with old characters getting nice overhauls and new ones looking absolutely fantastic. I can't quite get over Koshosho's pink-afro'd, pop diva design, it's deliciously campy. The soundtrack is that distinct mix of traditional Japanese and techno that fans have come to enjoy, and at least the Japanese actors are good at what they're doing, even if I can't follow them during gameplay.

With 55 characters, multiple Story modes, Free mode, and Chronicle mode, there's hours and hours to get through here. Unlocking and leveling, forging weapons using gems, there's loads to play with. Fans will be spending a lot of time on this one, that's for damn sure.

Bottom Line: Samurai Warriors 4 is a faster, greatly expanded addition to the series. Each character feels fresher, and there's a ton of stuff to do. I just wish the online play would actually be something acceptable for the modern day.

Recommendation: A great installment, well worth picking up for Warriors fans. As always, if you're not into these games, this won't change your mind.