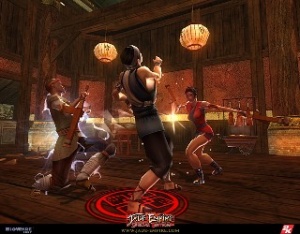 Jade Empire was a standout offering in the early life of the Xbox, a grim land where few RPGs dared tread. Now, for those who skipped it, or for that breed of gamer terrified of console RPGs, comes Jade Empire: Special Edition. It is the same game - and you are getting a two-year-old console RPG, if you're bothered by that sort of thing - but 2K and Bioware have added some new fighting styles, weapons, monsters and items and made some under-the-hood tweaks to make sure the console-to-PC transition goes as smoothly as possible. And, mostly, it works.

After the typical Bioware-style character creation, extensive, but with not nearly enough information- Does my high-speed kung fu chick need more Chi? What is Chi, anyway? - we enter the world of the Jade Empire, which is a magical version of ancient China that wouldn't be out of place in a Zhang Yimou film. Ghosts and monsters walk the Earth, magic airships soar through the skies and an orphan trains with an impossibly wise kung fu master high in the hills outside of a sleepy country town. Of course, the Bad Guys soon attack and the orphan/best student ever must seek his/her destiny in the wider world, which involves delving deeper and deeper into her background, as well as tracing a plot that may extend all the way to the Imperial Palace itself.

The PC-to-console transition is well handled, though it's obvious you're playing what was originally a console game. The game engine itself looks great and the world is beautiful, but the video in the cut-scenes definitely feels like it came straight from the Xbox. The environments are small, and loading screens are frequent but usually move quickly. I found it kept the game fun. Rather than spending a lot of time exploring a huge area with nothing in it, most areas involved wiping out a couple groups of enemies, grabbing any good loot, poking into the few corners that existed and moving on to do it again. I never hit that zone where there's too much pointless game "work" to do and the fun stops. 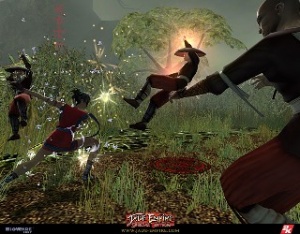 Perhaps most importantly, while there's the occasional "Oh, god, I'm playing a console port" moment in the menus and inventory screens, the controls work really well. Mouse clicks trigger attacks, making for a pleasantly satisfying clickfest, but the keyboard controls fighting styles and other adjustments. Changing from style to style is smooth, which is important, because it quickly becomes a necessity. The combat is enjoyable (a fighting style isn't just a tweak: The character actually changes through styles, and each is distinct enough to pick it out by sight) and can be surprisingly difficult without being cheap. While I lost an extensive number of fights, I always felt it was due to poor planning and execution on my part, not the game slipping in a gotcha.

As with most of the Bioware RPGs, this one sports an alignment system. At first glance, it's the typical Good vs. Evil, but look below the surface and it gets more sophisticated. The Way of the Open Palm is the path of "good," in that you help beggars, save kittens from trees and so on, but it also has consequences - that beggar may spend his donation on more booze, not getting his life in order. The Way of the Closed Fist is the "evil" branch, in that there's a lot more killing people and breaking things, but it's also not quite the black hat evil you'd expect. It's about strength. Those who have the strength to stand up for themselves are the ones that deserve help. The Closed Fist kung fu master helps those who help themselves, for instance, making sure a slave that killed her master goes free. In other words, you're an ancient Chinese Randroid, wondering why all those poor people don't just get a job. Dialogue decisions influence the path of the game's story, and working further and further along one particular path unlocks more attacks and more quests, though as is the case in all Bioware games, being a jerk is the way to have the most fun. 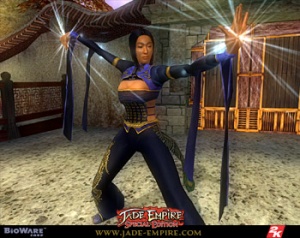 This iteration of the alignment system is surprisingly mature, allowing your decisions to be more than snappy dialogue patter. I remember one particular instance early on, where I captured one of the enemy's lackeys and interrogated him. After extracting every bit of useful information from him, I let him beg for his life for a while, and then my sidekick and I executed him on the spot and took his money, which was incredibly awesome, because snitches get stitches. And as in most of the other Bioware games, you can warp your sidekicks to your way of thinking, as well as working the romance angle or verbally abusing them for daring to show interest in you. It's pretty sophisticated, especially as we're still mired in the "YOU = GOOD, THEM = EVIL" era of gaming.

While Jade Empire is a short game compared to some of the 100-plus hour monsters in the genre, it's completely satisfying. I was glad to have a game I could complete in a week or two, rather than something that attempted to consume my life for a month. The world itself is beautiful to look at, and the way the world is built - story-wise - is incredibly deep. I have to tip my hat to any game design that includes making up an entire language. The combat is lots of fun, simple on the surface, with a lot more planning once the styles start piling up, and the story is something that should be experienced by fans of wuxia movies, or anyone hoping for a break from pseudo-Tolkien RPGs.