Developed by Insomniac Games. Published by Microsoft. Released October 28, 2014. Available on Xbox One. 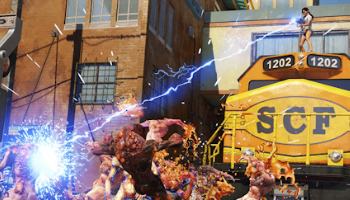 Comedy in games is apparently difficult to pull off, given the sheer number of them that have tried and failed. Even tougher, apparently, is the idea of a game that knows it's a game, and breaks the fourth wall to "hilariously" point out gaming's tropes and stereotypes. Eat Lead: The Return of Matt Hazard was a noble but failed attempt, while The Simpsons Game used the premise of "we know games can have lazy design" as a limp excuse to be lazily designed. Done wrong, these sorts of games can come across as cynical, rather than a joshing celebration of interactive entertainment.

Sunset Overdrive comes closer to nailing it than perhaps any other videogame, thanks in part to it concentrating on being a good game before making fun of games overall, then going to town on the jokes. Stripped of its attitude, Insomniac Games' latest offering is still a rapid-fire action game with lots of toys to play with and a focus on fun. The fact it successfully adds a thick layer of self-aware humor on top of everything is a welcome bonus.

This is an in-your-face, excessively loud, shamelessly gaudy power fantasy, and it knows it. While such a premise is ripe for laughs and self-deprecating gags, it also runs the risk of growing genuinely obnoxious. At times, Sunset Overdrive feels like too much, a game that never stops being "zany" long enough for the audience to have a breather. At other times, the jokes are too desperate to maintain an "edgy" style, and so we have a gun shaped like a dick and balls, or a man with no arms and legs ... and that's the joke.

Other times, we get to see genuine cleverness married to a wry observation of videogame design. The nameless protagonist makes fun of NPCs that magically disappear after cutscenes end, or smugly informs allies that even if they die, he/she will be fine and "Just respawn over there somewhere." The self-aware banter is woven so casually into the script that it works a lot better than it should, and once the hero starts complaining about NeoGAF tearing the game apart, you know you're in a world crafted by people who love games maybe a bit too much.

For all its Brechtian shenanigans, there is a loose plot draped over the nonsense, as a player-created character unites various factions around Sunset City in the wake of an apocalypse. A new FizzCo drink, Overcharge Delirium XT, has turned most of the citizens into eyeless, murderous mutants, and players will need the help of eccentric survivors in order to skip town safely. As with the gags, the story is very much a hit-and-miss affair, with the plot playing for time in places, and a fair bit of insufferably "wacky" voice acting popping in to scratch at one's eardrums. Countering that, we have a delightful antagonist in FizzCo's mascot, the goofy-yet-murderous Fizzie, and it's nice to see an army of rampaging mutant monsters that aren't zombies, even if the regular "OD" creatures are pretty zombie-like in their behavior.

Though the world may have gone to carbonated hell, Sunset Overdrive is all about putting fun first. Insomniac takes the crazy weapons (and weapon wheel) from its Ratchet & Clank games, adding even more ludicrous guns to the arsenal. There are a few standard armaments such as the "Dirty Harry" revolver and a generic assault rifle, but the main focus is on automated toy helicopters that provide support fire, explosive teddy bear launchers, electrical laser beams, and firework-spewing machine guns. Weaponry is divided into single-shot, rapid-fire, and deployable categories, and each gun type contains a wealth of inherently silly - as well as vastly entertaining - offense.

Combat abilities are improved by the use of Amps, upgrades that are equipped to both weapons and the player character. Amps range from the simple - setting targets on fire or freezing them - to the highly irregular - summoning the Grim Reaper on a successful kill, or turning an enemy corpse into a huge nuclear explosion. Amps aren't just automatically triggered, however. They only kick in once the player's "style" meter has met certain milestones, and it's this need to keep up a stylish performance that informs the pace and structure of fighting, as well as simply traversing through Sunset City.

The city is full of objects that can be bounced on, alongside rails and power cables that the protagonist grinds along with inhuman skill. By bouncing and grinding, running on walls, skidding across watery surfaces, and swinging from poles, players build up their style meter, which in turn triggers amps. Killing enemies while maintaining style builds it further, and so players are encouraged to never stop moving, constantly switching their behavior to keep that meter building. It's not enough to simply glide on a cable and shoot. To get those amps running consistently, one has to be jumping from car roofs, skidding along building gutters, and sliding on railings, all while still letting the bullets (or harpoons, or hairspray cans) fly at monsters, Scab gang members, and FizzCo robots.

As one might expect, urban warfare in Overdrive is an intensely chaotic affair, and it can be hard to keep track of targets while having to jump and dash all over the place. There is a very generous lock-on feature to assist with this, meaning you only really ever have to be looking in the vague direction of an enemy to hit it. While at first this may seem too forgiving, one soon learns to appreciate just how important it is. It also won't help you avoid the various bombs, leaping attacks, and sticky obstacles that the OD start employing against you as the game progresses.

Making use of the protagonist's improbable parkour skills takes a little getting used to. Bouncing from objects is as simple as landing on something (almost anything), while grinding is activated by pressing X near a relevant stretch of track. Likewise, wall running and pole-swinging are all activated by the same button in contextual circumstances, and one can gain a speed boost by hitting the right bumper. As with similar games, where many actions are used for a single button, Sunset Overdrive can confuse itself at times, especially since the environment is so thoroughly littered with parkour-friendly objects. You can't move for power cables and bouncy air ducts, and while that means you're always rich in options, it also means that the game sometimes disagrees with you about where you intended your character to go. Keeping a handle on all of one's traversal options can be tricky enough, but having the avatar grab a cable instead of the traffic light you wanted is an added layer of aggravation.