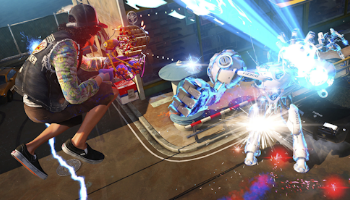 Missions generally involve going from place to place destroying stuff, picking up items, and generally causing havoc, though a few more involved tasks sometimes occur. Night Defense missions are undertaken in order to gain powerful new Amps, and involve protecting vats of specially produced Overcharge from incoming waves of OD. One can lay down a number of traps, Tower Defense style, in order to better protect one's perimeters, though the player will still need to dash and leap all around the base, dealing with mutant hotspots and taking out especially troubling OD, such as the gigantic Herkers or projectile-spewing Blowers.

Boss encounters are rare, but cleverly designed, often taking the shape of environmental challenges involving grinding one's way to a weak point. The city is also full of toilet paper, neon signs, stinky trainers, and security cameras, all of which must be collected as ingredients for new Amps. It all makes sense because of some reasons.

Character customization is a big part of the experience, with new clothing and body art unlocked throughout the campaign. Interestingly, players can change their physical attributes, including their sex, at any time, allowing for a truly flexible personalization. While you can't exactly sculpt your avatar to specific standards, there are enough preset faces and adornments to give you a good scope of options, so you can be a guy with neon hair, alien eyes, jester boots, and a miniskirt if you so desire. And I do desire.

There's a lot of fun to be had with Sunset Overdrive, though at times I found the non-stop action to be a little more limited than it would first appear. For a start, not all weapons are created equal, and when you find the few that work for you, you won't want to waste your time trying to upgrade or amplify anything else. The fact that ammo runs out quickly can also be a pain, because even though it drops plentifully enough, the return rate's been designed to make you constantly access your weapon wheel, which will take you out of the game a lot unless you mind tapping a button and simply grabbing the next available gun in your selection. It also takes a long time to feel like you're getting any useful Amps, especially since collect-a-thon quests are constantly required produce more of them, leading to a slow, stunted feed of fresh enhancements.

One thing that works quite well, however, are "Overdrive" upgrades. These are little perks that can be slotted onto the character and directly enhance skills based on gameplay. Unlocking and upgrading Overdrives requires one to spend badges, which are awarded to the player by performing certain tasks. You kill a lot of OD, you'll get an OD Killer badge. You run along the wall enough times, you get a Wall Runner badge. These badges are then spent on specific Overdrives, meaning that someone who uses rapid-fire weapons a lot will get access to Overdrives that strengthen that specific weapon type, while those who spend a lot of time killing FizzCo robots can get Overdrives based on killing them better. The more you do a thing, the better you can get at it, though variety in gameplay is encouraged in such a way that it's hard to feel like you're specializing in many directions. Even so, I love an upgrade system that passively tailors itself to particular playstyles, and Badges are a fun way to encourage that feeling.

By accessing various stations dotted around the city, one can jump into a multiplayer mode on a whim. Online co-op consists of undertaking various missions across the city, earning points for each successful task completed. As you destroy Scab bases, grab points in parkour missions, and take down FizzCo robots, you build up meters that raise "Chaos" and the strength of the team's Night Defense traps, all leading up to a gigantic defense mission against an entire army of enemy creatures. With up to eight players partaking, and a number of OD more than equal to the resistance, these finales are absolute anarchy, and can be a lot of fun. While it's a bit of a tacked on extra, it works quite well, and is a great way to level up weapons and earn extra currency for equipment purchases.

Being an audacious comedy game, Sunset Overdrive is sometimes overbearingly exaggerated in the presentation department. Almost as if to undo the generic drabness of Insomniac's last game, Fuse - dialog in Sunset even makes fun of the kind of focus testing that killed that particular title - everything is colorful and magnified to the point of garishness. Sunset City is full of orange, yellow, blue, and anything else that might visually clash, while animations are as cartoony and slapstick-friendly as possible. Even dying leads to one of several over-the-top respawn animations, while there are only a handful of weapons that won't lead to explosions, fireworks, or some other form of comic silliness. Oh, and the more "usual" weapons can always be made crazier with an appropriately nonsensical Amp.

The yelling voice actors and constant stream of clanging pop rock ensure things never slow down, and as I've already suggested, the constant assault on the ears and eyes is not always welcome. By never letting the player come down, the consistent fever pitch runs the risk of grinding a player down to the raw nerves, or at the very least desensitize the audience into not caring. At times I let swathes of the game's content wash over me, because there was no other way to process it than sit there and let Sunset's brand of humor beat you over the head.

As domineering as the game's outrageousness can get, however, at least it's not another po-faced shooter that takes itself too seriously and checks all the usual, mundane boxes. It seems increasingly rare to see a console game - much less a combat-heavy one - that allows itself to be colorful, carefree, and funny, and I find it hard to disrespect that. While there's obviously plenty of room for your grim, dark, militarized war games, it's refreshing to see something so irreverent, bright, and silly. Maybe Insomniac overdid it in the screwball department, but I'll take that over another Fuse. Just make sure you don't "OD" on all the lunacy.

Bottom Line: While its commitment to madness can be maddening itself, Sunset Overdrive is an energetic, fun-focused adventure. The jokes don't always hit home, but this is a game that loves being a game, and you can't hate that sort of honesty.

Recommendation: Would you like to play Lady Gaga in videogame form? This is about as close as you're getting.