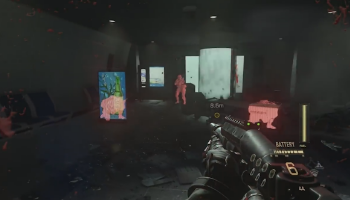 If one can extend empathy toward game studios, it's not hard to see Call of Duty's big problem. For half a decade, the series has delivered a game every November with clock-like efficiency, each one aiming to be the biggest selling game of its year. After such a relentless schedule, it's clear that the series' foundation has been crumbling with age, but due to its consistent success, it's difficult to reinvigorate the games without the risk of altering what fans have come to love about them.

Treyarch has been most earnest in its efforts to shake up the system, marrying a clever plot-led campaign to futuristic technology, and providing some of the most interesting multiplayer perks the series has seen. Even so, the Black Ops games still can't stray too far from Duty's zealously obeyed formula, a formula that Call of Duty: Ghosts fully retreated to with unambitious loyalty. Where once the series felt bold, where once it codified a lot of modern multiplayer game ideas, now it seems afraid. Afraid to be the same old CoD, and afraid to be anything else.

Call of Duty: Advanced Warfare is a perfect encapsulation of that fear. It attempts to be an evolution of the series, but it's not so much a step forward as it is a halfhearted dragging of the feet. Its touted focus on science fiction is window dressing - a few laser beams and jetpacks bolted awkwardly onto the usual framework of assault rifles and shotguns, the equivalent of a "re-imagining" of Romeo & Juliet in which the only change is that the actors are all wearing silver jumpsuits. Aesthetic changes rather than fundamental ones, and not even significant aesthetic changes.

The campaign is not as awfully dreary as Ghosts' was, but it's so monotonous that it's difficult to get through. While promotional material would have you believe it's all about flying through the air and crawling up walls like Spider-Man, the reality is that AW's single-player is the same NPC-led, corridor-laden shooter you've come to expect. Yes, you can climb walls, but only in heavily scripted sequences, once or twice in the campaign, when the game tells you to. You get an EXO Suit, designed to give you tech-enhanced superpowers, but what that boils down to is mostly bullet-time slowdown effects and double jumps, and the game chooses what "powers" you get in each mission, rather than give you any agency.

It doesn't help that everything this so called "advanced" combat does has been done better in other games, many of them several years old. Double-jumps, bullet-time, cloaking devices, it's all embarrassingly old-fashioned by today's standards, and comes off like a half-baked emulation of Halo and Crysis - all in linear environments where one can barely take advantage of the cheap, off-brand toys.

I'm not sure if Advanced Warfare is especially egregious about putting players on a leash, or if I've just played so many CoDs that I've officially grown sick of it, but the fetters are especially noticeable this time around. I could barely move for NPCs shoving their way past me, opening doors for me, telling me when I could and couldn't shoot. I failed one mission for straying too far from a soldier I had to follow, all because I got sick of his slow-ass trudging and wanted to explore. Exploration is punished, actively, with arbitrary failure states. At one point, I uncloaked to charge the batteries on my stealth device, and failed the mission because the guy I was following went too far ahead and I got shot to pieces for my transgression. See, I had to charge the batteries when he told me to, not when I felt I was safe to do so. It may as well have been a quick-time-event (of which the game boasts many).

Initiative is condemned. Agency is penalized. To lead is not to be tolerated. You do what you're told or you suffer, soldier! OBEY!

The only highlight of the campaign is Kevin Spacey, playing the character of Kevin Spacey, and that's only because he's Kevin Spacey. Rather than actually create a character to serve as antagonist, Sledgehammer simply gives us a recognizable actor with a creepy cloned face, and lets him do his usual thing. He's not really a villain, just an idea, a case of the game going, "Look, it's Kevin Spacey, doing the thing he's famous for doing, and it's going to really surprise you when he's the bad guy maybe!" It's writing at its cheapest, or it would be if the game didn't also include a quick-time-event where you "Hold X to pay your respects" at a military funeral. A funeral for a guy I don't care about, who sacrificed himself to save a guy I don't care about. Press X.

The actual meat of the action is decent enough, but it's about as advanced as chainmail. You march down corridors and, when you're allowed, you shoot factory-standard mooks with the usual cavalcade of guns. Every now and then you stumble upon something unique, like a cool laser beam, and there's even an instance where you get to wear a mech suit, but once again these are things we've seen and done in dozens of other games. One particular cool toy is the variable grenade - grenades can be switched while held to provide EMP blasts or even highlight all enemies in the surrounding area. There's also a homing "smart" grenade that's quite fun to use. So that's something, along with perhaps the laziest skill tree ever conceived - a handful of minor improvements you pay for with one or two points, and I don't know why they included such an atrophied progression system.

Despite a handful of extra playthings, this is the CoD campaign you've come to know and tolerate. The attempts to provide dramatic sequences have gotten more desperate, and the coddling of the player is harder to ignore, but if you just want to shoot some dudes, Advanced Warfare can at least do that, wrapped up in a story that wants to try and make a statement about something, but can't decide what. Is it pro-military? Anti-military? Is CEO Kevin Spacey an evil extremist, or does he have a point? Are governments inefficient? Can corporations do good? These are all questions Advanced Warfare could have addressed.

It doesn't though. Of course it doesn't.