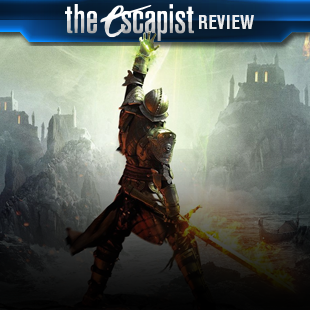 I like to collect books, herbs and metals. It's a thing I only do in virtual worlds. The character I control is an absolute freak that struggles to pass by even the most commonly seen node of elfroot. Even in the thick of attack from Tevinter mages or crazed Templars, I'd rather pick flowers than cast spells. I often cure myself of this obsession by realizing there's usually nothing to do with these pretty flowers in the game I'm playing. They almost always serve no purpose at all. In contrast, Dragon Age: Inquisition reminded me more often as I progressed that every single freaking flower matters in your quest to save the world of Thedas. That's because each system in this sprawling RPG is woven into the next to create a tapestry of heroic fantasy. Every creature you best, every relationship you cultivate, every weapon you upgrade, every place you discover means something to the player in this excellent experience provided by BioWare.

You start out the game in the Fade, that other plane where magic and demons come from in this setting. The character customization comes up soon after and you have the chance to sculpt your hero with an almost frightening level of precision. You can make elves, dwarves, humans and now the horned Qunari with the tools at your disposal, but it isn't until your character starts to speak that it begins to feel real. On that tip, the conversation choice system in DA:I is the familiar radial menu, but it allows an impressive amount of expression. Sadly, not all the voice actors employed bring the same level of expressiveness to their performance, but that could have just been because I chose to play a stoic female Qunari for the bulk of my time in Inquisition. The male elf mage I experimented with is a smirky little diva - all is right with the world.

The story is full of twists and reveals - often referencing previous Dragon Age games and DLC. An important meeting between the Templars of the Chantry and the Mages who rebelled against them in Dragon Age II is disrupted by a huge explosion and your character is the only one there who survived. Finding out how and why takes up the bulk of the plot, but there are some interesting discoveries as to the nature of the darkspawn adversaries in Origin and the religion of the Chantry as a whole. Fans of the series will appreciate the nods to previously seen characters and stories - it's great to hang out with the sarcastic dwarf Varric again, and his relationship with Cassandra, the Seeker interrogating him all through DA2, is comedy gold. You'll be hard-pressed to choose only three companions to take with you out of the nine well-established party members. Even Freddie Prinze Jr.'s performance as Iron Bull, the Qunari mercenary, is entertaining, huge horns and all.

BioWare wonderfully blended third-person action and a tactical top-down view in combat. Because of a decent AI controlling your party members, you can concentrate on controlling one rogue, mage or warrior exclusively to mop up the mooks with devastating combos. But for the more challenging fights against dragons or what have you, it's probably a good idea to enter tactical mode for a bird's eye view of the field. You can then pause and give each party member specific orders like moving behind the big guy or shielding everyone with a magical barrier, watching your orders play out by starting time flowing again. It's also great how you can seamlessly move between the two modes, lending a hand when you need to, sitting back to watch them take care of the baddies or moving to third-person action view to mix it up in the fray. The AI is moddable too, allowing you to set thresholds for healing potion consumption or to avoid using some abilities or actions unless you command them to. You can set it and forget it, or change up each party member when they get new abilities. It's up to you.