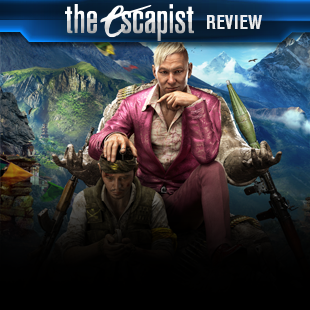 The Far Cry series has become synonymous with being "over the top" in its grandiose action, open-ended gameplay and memorable characters. The latest in this series, Far Cry 4, shows little intention of changing up this formula, giving players another large-scale environment full of enemies and areas to explore with plenty of ways to do either. Besides some problems with its story and characters, it's one game that any action fan will want to think about putting on their holiday wish list.

Far Cry 4 has you play as Ajay Ghale, a young man who is traveling to spread his mother's ashes in her fictional home of Kyrat, located in the Himalayas. But everything quickly goes wrong at a border checkpoint and you're soon captured by the villainous Pagan Min, a flamboyant dictator that rules Kyrat and also claims to have personal history with Ajay's mother. You're soon rescued by the Golden Path, a resistance movement that's been battling Pagan's rule for years. They give you a machine pistol and bam! Thus starts the mayhem.

Mayhem is something Far Cry 4 has in large supply. Right from the start, the amount of flexibility you're given in almost any firefight is almost overwhelming. You can chuck grenades around like a madman, snipe enemies from afar, sneak around and stab guards in the throat, or emulate John Rambo by finding the biggest gun you can and holding down the trigger until the hammer goes "click". And those are just the more straightforward methods of Far Cry 4's action, as you can now experiment with throwing bait around to lure predators down on enemies or riding an elephant into battle and smashing cars aside like toys. Aside from a few missions where you're forced to approach an objective in a certain way, Far Cry 4 does a fantastic job of giving players a large degree of agency in how they'd like to engage with its action sequences. There is no funneling into a glorified hallway as seen in other shooters. And in true Far Cry fashion, the gameplay is dynamic enough to just plain surprise you, whether it's a guard you didn't see coming up behind you with a shotgun or a random honey badger descending upon the battlefield to claw everyone's eyes out. It's impressive stuff to say the least.

What's also impressive is the country of Kyrat; a huge, beautiful valley surrounded by tall mountains that you'll likely spend hours exploring by hiking its hills and climbing its cliffs. Ubisoft Montreal has done a great job of making Kyrat feel alive, with the sounds and motions of all manner of wildlife and people going about their day along its dirt roads and dilapidated buildings. While walking around, you may notice the barks of fully automatic weapons just over the next hill, signaling a possible skirmish between the rebels and Min's army. You'll hear villagers yell out in fear if they see an eagle or watch as a leopard stalks and kills a deer in one smooth motion. It can get a little frustrating how you can't seem to go more than a few meters without stumbling across something going on in the game world, but, if anything, at least it means your travels won't be boring.

Several components from Far Cry 3 do make a return in 4 without too many changes - you'll hunt animals to craft new gear, liberate bell towers to reveal parts of the map, and conquer outposts to provide new fast travel points. Kyrat is also loaded with multiple side quests, collectibles and random "Karma" events that break up the story campaign. Thankfully, nearly every extra mission is tied to some kind of reward that helps progress the game so they don't feel like pointless grinding. Most weapons are unlocked via campaign missions, but you can speed up that process by liberating the towers or taking out enemies armed with the gear you want. Several abilities in the skill trees are locked until you complete prerequisite tasks like taking over outposts without being detected, or playing through a specific type of side mission. You can earn discounts on ammunition and supplies by assisting rebels in skirmishes with Pagan Min's army or rescuing hostages. Whether it's just getting some extra money, experience points, or access to a special weapon, Far Cry 4 does an excellent job of making you feel like anything you do can reward you in some way, and you're not just trying to fill up an arbitrary bar for an achievement.

A definite highlight of the game is seen in the Shangri-La missions. As you collect parts of a thangka, you're treated to "visions" of an ancient warrior who has traveled to the mythical land of Shangri-La. This beautiful world is filled with rich red and golden color aesthetics, and the darkened teal and blue of lurking masked demons. While more linear than the rest of the game, these missions are more evenly-paced and a welcome break from the bullet-filled Kyrat. You'll banish masked demons with the help of a mystical tiger and a time-slowing bow, while a narrator recites the tale of the warrior's quest to defeat the evil that's taken root in the land. With great visuals and challenging combat, I could honestly see myself playing an entire game's worth of missions in Shangri-La, battling monstrous foes with my tiger friend and listening to the narrator regale me with more stories.