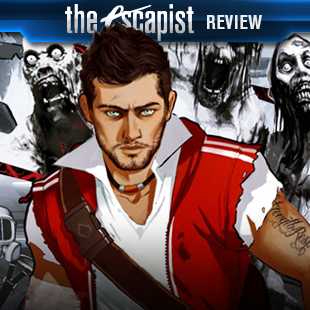 I don't even need a good look at the zombie to tell he's different from the usual lot. Normal zombies can be swift when they want to, but he's not just fast; he's aggressive. He comes barreling toward me like a lion that's spotted a choice gazelle and when he comes near, he leaps into the air, slashing at me with knuckle claws better suited to Hugh Jackman than a member of the undead. I dodge out of the way and counter with a quick swipe of my firefighter's axe. He blocks it and immediately lashes out with another claw strike that catches me in the midsection and leaves me on the brink of death.

Cursing, I sprint away to buy time so I can heal. It does me little good. In an instant he's on top of me again, clawing away with merciless speed that requires every fiber of my attention to avoid. Barely hanging on as I am though, I start to notice brief pauses in his offense; chances to strike back. I start chipping away at him, cutting off bits and pieces of his health bar. It takes a little while, but he finally goes down and, for a moment, I'm left basking in the breathless excitement that comes with defeating a particularly difficult enemy.

The biggest problem with Escape Dead Island is that moments like these are few and far between. It's unfortunate, because Escape possesses all of the building blocks necessary to make a decent game. Its visuals and sound are top notch, employing bright cel-shaded visuals and quality voice acting that rarely fails to deliver. It also boasts an interesting story premise and features controls just as smooth as some of the best action titles on the market. Rather than using these strong foundations to construct something memorable however, its developers produced a game that's perhaps the very image of mediocrity.

It opens with a trio of friends in a boat on their way to the zombie-infested island of Banoi. The protagonist, Cliff, along with his companions Linda and Devin, hopes to investigate the rumors surrounding the island, and use it as a platform to launch Linda's journalism career while impressing Cliff's father, a prominent media mogul. Soon after arriving at the island however, one of the trio is injured by the resident undead, and Cliff embarks on a desperate mission to find help and a cure. Not all is as it seems, however. As the game progresses it becomes clear that what the player sees through Cliff's eyes may not be entirely grounded in reality.