Developed by Sora Ltd. Published by Nintendo. Released on November 21, 2014. Available on Wii U. Review copy provided by Nintendo. 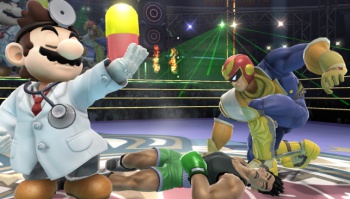 So we'll just go ahead and say that Super Smash Bros. for Wii U is the best game on the Wii U. Frankly, it's a console seller. It stacks up to first party heavy hitters like Mario Kart 8 or Super Mario 3D World, taking the cake from either one for party gaming while being relatively comparable in single player enjoyment. It's still the Super Smash Bros. that has been around since the N64 days, but eschews both the speed of GameCube's Melee and the casual focus of Wii's Brawl for a crowd-pleasing mix of goofy randomness and speedy skill-based combos that welcomes all comers to the game table. This is easily one of the most accepting games for players of all skill levels there is - and for all that the phrase is overused, "Easy to learn, difficult to master" applies to "Smash" like "aquatic" to "frog."

Choosing from 40-something characters from not only the worlds of Nintendo first party content, but stars from Sonic to Mega Man, players can battle in a variety of single and multiplayer modes with up to eight(!) players. I add that meaningful exclamation mark because in an age where local multiplayer is being cut further and further back, Smash accommodates literally everyone who lives in my apartment building in the same room on the same game. You've also got a board-game like Smash Tour, where players roam a field gathering upgrades and warriors for a final showdown against each other. Meanwhile, the classic mode is as good as ever, and includes a fun upgrade of choosing which clusters of enemies you'll brawl, while wagering coins against your own success. That's not to mention challenges, special orders, or the ever-popular bizarre scenarios of event mode. It's spoiled for choice, and excellent with friends - though computers can let you down if you're a superb player. Thankfully there's working online support, and it works very well aside the inevitable few dropped games and remarkably rare lag spikes. Online also comes in flavors that cater to both casual and competitive players, "For Fun" and "For Glory," but that's it - there's not much of the customizability of your home games unless you're playing exclusively with Wii U friends. And let's be honest, only a select few people have many of those.

Smash is delightfully colorful in HD, with style and animation easily making it look better than games running on platforms twice as powerful. The sprawling eight-player stages look superb, as do the lightly retouched versions of favorites returning from Smashes past - like the Donkey Kong level from the original Smash, which retains the chunky polygons and saturated colors of the N64 era. The characters and animations look excellent, and it's a continual wonder how the cartoonish design of Pikachu looks good next to the fantasy aesthetic of the Fire Emblem characters - but it does. 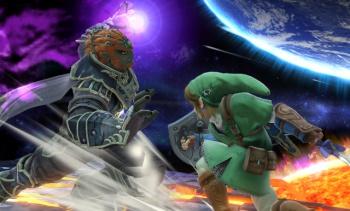 The mechanics are slick, integrating just about every imaginable form of control a Nintendo console has ever used - from Wii U Pro controllers to the Gamepad (with screen, for off-TV play) to yes, the adapter that adds up to four(!) classic Gamecube controllers to the fray. The game itself is quite fast, requiring twitch reflexes, but that only really matters if you're trying to master it. If you're playing more casually, the plethora of powers and items flying around the screen will make reflexes a secondary concern to positioning and timing - knowing when to pick your fights and when to run will make all the difference in staying alive. The individual characters are fascinatingly different, aside from the classic "small difference clones" like Falco and Fox, with new ones like Rosalina & Luma having unique mechanics that make you want to play hours with them alone so you can master their playstyle.

Which is really what Smash is good at - making you want to play more. This is one of those games where it's easy to say "just one more match" for five hours longer than you wanted to play. It absorbs and addicts you, drawing you further and further into screaming obscenities at not just your friends, but at obscure challenges and events built into the game itself. At the same time, it's surprisingly easy to have someone join you for co-op midsession or transfer over to multiplayer matches when a third person shows up, and since basically any match counts for unlocking you don't feel like you're not getting anything. Smash is as good as a video game gets - it's fun, accessible, easy to play, and absolutely packed with features at its price point.

Bottom Line: Super Smash Bros. for Wii U delivers hour after hour of fun fighting game play, even if you hate fighting games.

Recommendation: This is the must-own game on the Wii U. Buy, beg, borrow, or steal. If you were holding out on buying a Wii U, now's the time.