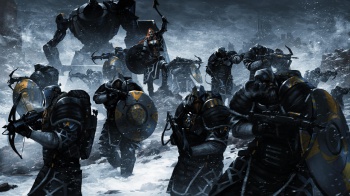 The crashed survivors of a spaceship wreck find themselves on a fantasy planet of magic and intrigue. Though they recognize the natives' magic as based on ancient nanotechnology known as dust, it's beyond their ability to comprehend, and the profusion of bizarre sentient species on the planet is unexplainable. So they delve deep underground, making alchemical powered armor and rapid-fire crossbows to replace their aging technology. Over generations, the survivors forget their origins among the stars. These are the kinds of stories that make Endless Legend not just one of the best premises for a fantasy game recently, but one of the most stylish games to release this year. It's a sword and spaceship fantasy game in the hex-based strategy style of games like Civilization V. The beautiful palette of colors, brilliant interface design, and experimental game mechanics combine to make this a wonderful strategy experience - if only some of the more byzantine mechanical complexities and odd quirks didn't hold the experience back.

Endless Legend seems willing to do the one thing other games in its genre aren't: Break the rules. Whether it's making a faction that simply doesn't use one of the major resources or taking away direct control or your units, the game is a masterclass in shattering your expectations. While it's not always executed flawlessly, the differences between factions, missions, and maps make every hour of the game unique. This isn't simply that the Babylonians get +10% grain production while the Assyrians have a unique unit, this is that every faction's units are unique, and they all come with twists as powerful as, for example, that the Roving Clans can never start an offensive war, or that the Drakken can force other players into alliances with them. 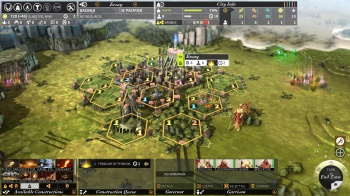 The game's models and terrain are painted in a soft set of pastel hues, giving everything a more fanciful look, but letting the terrains like deserts and arctic biomes really shine without being too bland. The models are beautifully animated, much like in any other game by Amplitude, living up to the standards of quality set by games like Endless Space. The real star of the whole game, though, is the interface for every screen you can think of. From the main map to the technology research screens, there's rarely a moment where you can't find a stat you're looking for or can't figure out why your income is what it is. Mousing over nearly everything pops up a tooltip. Information that's fluff is always in italics, so you know game effects from flavor. This is the most immediately playable strategy game I've ever sat down with, and strategy veterans won't need anything resembling a tutorial to get started. I will not even begin to describe the wonderful music, I'll just link you to the entire soundtrack.

On the strategic level, the game is about taking control of regions on the map. Once someone builds a city in a region, it's claimed, and nobody else can build anything in that swathe of hexes. Cities expand over time, with circling districts increasing population and income for their owners. Regions also contain various strategic resources and placements for outlying structures, from mineral extractors to watchtowers that peer over your borders at what your opponent is doing. The more exotic names for resources, like Glassteel, might confuse you at first, but they have distinct enough icons on the interfaces that you'll figure it out quickly. There are a variety of interesting and weird hexes to build your cities near and exploit, from fantastical trees of life that produce foods even in the depth of winter to fields of floating rocks that your mage-scientists can study to learn the secrets of antigravity. While these are great for flavor, each region ends up containing a few of them, so you have to balance the defensibility of a city position with its possible benefits.

There are a few subgames to the strategy component: Research, Markets, and Influence. Research proceeds as in many other 4x Strategy titles. You accumulate it from cities, and once you've gotten enough towards a particular technology it unlocks, giving you new units, buildings, or powers. The only twist is that tech isn't a tree or web, but a series of circles representing stages of development. Once you've gotten a handful of techs in one circle, the next unlocks. It's an interesting idea based in technological development very unlike our own world's, but can leave you paralyzed with indecision in later stages of the game, or crippled because you forgot a key tech a few tiers back. Empires also accumulate influence, which they can use to build relations with other empires like trade agreements, or expend to give their own empire bonuses in "Empire Plans," which range from weak bonuses to food production to +50% attack for all of your units. The trade markets let you relate with your neighbors, hire mercenaries, and sell off your excess units, but also produce packets of resources like food or science and send them to your own struggling cities or sell them to your neighbors. 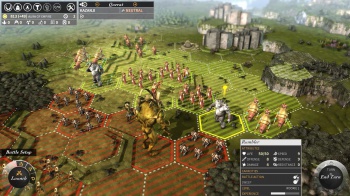 Once you're maneuvering armies around the map, they can collide with your neighbors or neutral third parties and start fights. As combats begin, a chunk of the world's hexes become a turn-based battlefield where you can order the unites in a stacked army around. If you've got nearby cities or other armies, they'll join in with militia or units over subsequent turns as reinforcements. You don't control your units directly in these combats, just give them postures and orders and hope the battlefield doesn't get too chaotic for them to carry them out. It's not the most nuanced tactical situation, and you can build superpowered broken combos very quickly. The computer, especially, has a lot of trouble and tends to focus on one unit to the exclusion of a unified strategy. Other players will give you more of a run for your money. If you don't like it, the autoresolve battles don't tend to give you too raw a deal.

There are eight victory conditions in the game, though realistically not every faction can accomplish every condition and some are best at one to the exclusion of others. They tend to take a little longer than you'd like, and even fast games can drag out if you're going for a trade or diplomacy victory. Likewise, the computer has a real hard time going for anything but a domination victory, though on its hardest settings can surprise you with a wonder or trade victory. When it comes to real competition, this game is truly strongest in multiplayer, where other players will take full advantage of their faction's powers to game the systems and give you a run for your money. Otherwise, the computer tries, but it's not the king - though since release Amplitude has improved it significantly.

Bottom Line: Endless Legend is a lovely game with deep strategy that's a singular pleasure to play, but can sometimes disappoint you in finer details. Know that if you're never going to play multiplayer, you're not getting the whole experience - so bring a friend.

Recommendation: If you were disappointed with this year's turn-based strategy offerings and haven't tried Endless Legend, I've got advice: Play this game.