Developed by Volition. Published by Deep Silver. Released on Jan. 20, 2015. For Xbox 360, PlayStation 3, PC, Xbox One, and PlayStation 4. Copy provided by publisher. 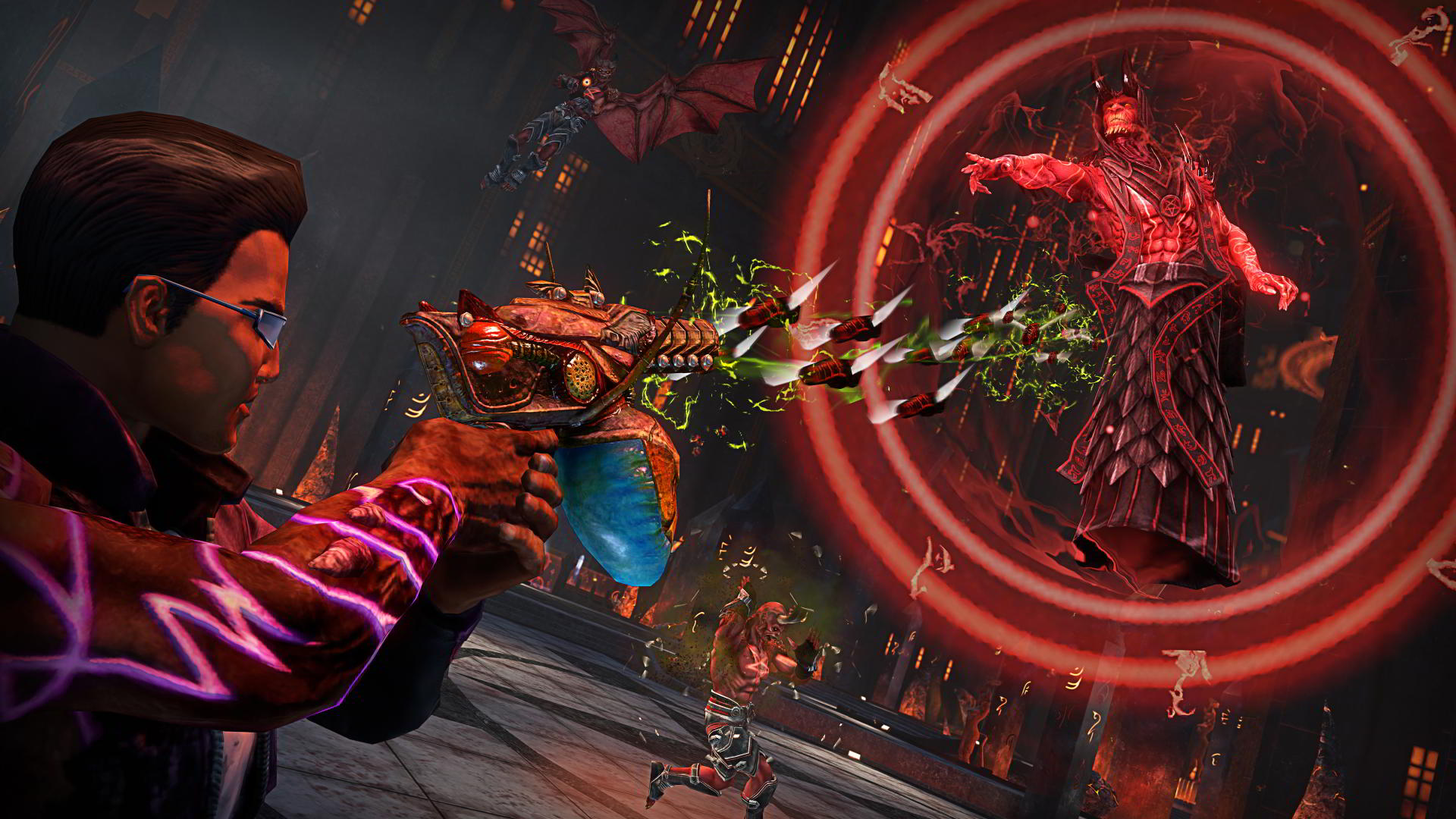 "Punching the Devil in the face" is every gangster's dream, isn't it? No? Well, you haven't been paying attention to the descent into madness that is the Saints Row series, have you? With the last full release Saints Row 4 devoted to sci-fi and fantasy much more than gangbangers, it was perhaps inevitable that the follow-up standalone expansion would go even farther in abandoning its supposed genre. Gat Out of Hell is once again narrated by Jane Austen and the writing within the cutscenes is at once literary and puerile. I just wish there were more of them - the open-world diversions like flying on angel's wings, shooting demons, and fraud are all great but it's over far too quickly.

The story is familiar if you're into that whole liberal arts English major thing. Most of the gang is celebrating the birthday of Kinzie (I wonder how old she is?) Kensington when a portal opens up and the Boss of the Third Street Saints (your player character from SR4) is pulled into Hell. Johnny Gat and Kinzie talk to /slash/ shoot a Ouija board to convince the spirit within to open their own portal and, voila, the pair of heroes enter the Hellish cityscape to rescue the Boss. Oh, and punch Satan in the face. That bit's important.

Gat Out of Hell eschews the normal mission-giver narrative that rules most open world games, but it's still has some decent structure in its three acts. You meet some old frenemies like Dane Vogel from Saints Row 2 and the twins from The Third, as well as new allies Vlad the Impaler, Blackbeard and William Shakespeare. Yes, the Bard has set up a club in Hell called the Tempest because of course he has. These personages don't give you specific missions other than unlocking some arcane powers, but they guide you through playing through the many different diversions available in the open world of Hell to get Satan's attention.

The activities are mostly rehashes of other challenges in Saints Row games like the rag-doll fraud and surviving waves of enemies by shooting them up, but the new "salvation" bit of collecting souls falling from the skies showcases the flying mechanic. You'll use an arsenal of Hellish weapons such as frog-shooting guns and a minigun-equipped armchair, and the arcane powers quickly become second nature in big fights. Stomping the ground to send a blast wave throwing demons into the air never gets old.

Completing any bit of mayhem progresses your Satan meter and getting it up to a milestone essentially unlocks a new cutscene advancing the story. The most notable of these is the extended musical number in which Satan, his daughter Jezebel, and the heroes sing about their emotional states. While the song is campy as all Hell (and rife with puns), it's played completely straight and I love it if only to hear Daniel Dae Kim struggle with talk-singing his part as Johnny Gat.

The real star of Gat Out of Hell is the city. Hell is gorgeously wrought, and it's enjoyable to just glide along on fallen angel wings taking it all in. Skyscrapers transform into Gothic pillars, lava flows from the sky into pools of fire, and the canyon slums all make the city of Hell a terrible place that's beautiful to behold. Rusted-out vehicles move around the streets and spontaneously explode, while lightning strikes randomly with a thunderous crack. The regular populace is meandering grey souls called husks, and they are just fodder in the war between the Saints and Satan. The whole city of Hell has a wonderfully consistent feel to it.

While many of the superpowers from Saints Row 4 return, such as mega jumps and super sprinting, flying is overhauled and it's just exquisite. Flying takes some skill to master even after the prolonged tutorial - you have to keep up your speed through diving or the limited wing flaps to prevent stalling. Falling into lava sucks. Once you do master flying, and invest some power into upgrades, it will be your preferred method for getting around the city. Hell, you can spend hours just flying around collecting the hundreds of blue orbs stashed in every nook and cranny.

How many hours you can devote to the open nature of Gat Out of Hell will determine whether it's valuable enough for you to invest $20. The main story, such as it is, can be played through in about four hours, which feels a bit on the short side. That doesn't touch anywhere near 100% completion, to be clear. There are multitudes of collectibles, challenges and hidden objects that can certainly occupy your time if you enjoy that sort of thing. Gat Out of Hell supports 2 player coop out of the box - one player occupies Kinzie while the other embodies Gat - and playing the completionist with a friend might make it all worthwhile.

Bottom Line: Gat Out of Hell is a comedic romp through myth, literature and video game tropes. The writing is smart, the gunplay is solid, and the city of Hell is a blast to fly though. Some may miss the more traditional mission design or lament its brevity, but Gat Out of Hell is a great way to cap off the story of the Third Street Saints

Recommendation: Fans of Saints Row 4 won't be disappointed in the ridiculous follow-up, but first-timers may want to play through some of the earlier titles in the series before this delicious dessert.