The Legend of Zelda: Majora's Mask has two reputations: It's "That Other Zelda" from the N64 era of Nintendo. It's also "the weird Zelda." It's the one without Zelda, featuring an acid-trip pseudo-sequel to the beloved Ocarina of Time that simultaneously delivers more of the Zelda experience while iterating on the franchise. Much like in Ocarina of Time 3D, nobody at Nintendo seemed to be trying to change that with the release of Majora's Mask 3D - but they snuck in some subtle changes to the Zelda formula that make the game imminently more playable and simultaneously more enjoyable. From a revamped menu and quest system to redesigned boss fights and graphics, this is very much the game you've played or heard about, and at the same time it's subtly different. In the end, the question is this: This game holds up, but does it live up to its reputation almost fifteen years later?

If you've played Zelda before you know the drill by now, but let's refresh. You'll guide link on a journey through the world of Termina, exploring temple-dungeons and solving puzzles with both skill at your tools and talent at figuring out social interactions among the world's inhabitants. You'll gather new gadgets, and uniquely in Majora's Mask you'll gather magical masks that transform Link into one of a number of Zelda races, giving him new instruments and skill sets. You'll do lots of running back and forth fetching items for one purpose or other. Majora's big twist on the formula is that you'll do all this on a timer. The giant moon above Termina is going to crash down and destroy the kingdom any day now, so you have 72 hours before the world ends. Your 72 hours plays out in about an hour of real world time. Problematically, this Zelda is almost entirely without tutorial - if you've never played Zelda before you might find yourself a little lost. 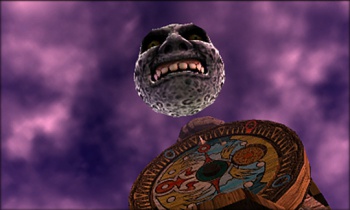 Of course, this being Zelda, you can travel back in time to the dawn of the first day over and over to solve problems quickly. As you keep traveling back and forth, you get more tools to accomplish more tasks faster. That said, much of the gameplay in Majora's Mask is relatively nonlinear, and you can tackle many of the sections of the game in whichever order you please. This leads to to unique properties for this go-round in Link's shoes: You've got to do everything as fast as you can, which makes the game difficult. You've also got to redo a lot of work if you fuck up and can't get a dungeon done fast enough. One of these things is fun, one, I think you can guess, is not. That's okay though - the world is worth experiencing over and over.

The design of Majora's Mask is simply fascinating and gorgeous. The remastered graphics for the 3DS are superb, with the colors popping out and shadows and lighting leagues better than the N64 or virtual console game ever was. The psychedelic shenanigans of the skull kid, fairies, and masks look superb with richer colors and textures, showing off more detail than the previous game had in entire dungeons. Likewise, the 3D is excellent looking, even if like me you rarely use that function of your 3DS at all. 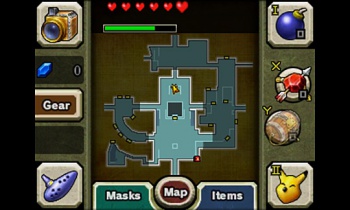 Other changes accompany the graphical remastering, both in gameplay and controls. The new interface using the touch screen is awesome, with the ability to bind extra masks and items to touch buttons being the handiest for dungeons where you want to have a few items on buttons but keep the ability to shift to the form or mask du jour handy. Playing without a Circle Pad Pro attachment was smooth and easy - I never wanted the extra stick or button. Motion sensing controls for both camera look and using the bow or other ranged attacks were somewhat surprising, but really only came in handy a few times. I imagine that some users with worse stick aim, though, will find it a godsend. The crowning glory of the interface, though, is a fully modernzed quest log like you'd expect to find in Skyrim. Taking the form of an upgraded Bombers' Notebook from the original, the new log tracks not only all your multithreaded time travel shenangians and quests, but also every stage so you can easily repeat past events if you want to. It also tracks every character's schedule, telling you where they'll be and when once you meet them - a godsend for those who remember taking pages of notes in the early 200s.

A few other minor gameplay changes accompany, such as a much better distribution of save points across the world and the addition of new save points. The process of travel has also been simplified, and Link's owl friend gives him the powerful Song of Soaring - essentially the Song of Fast Travel - much earlier in the game. Some might find that the addition of easier travel and saving makes the game itself easier, but I've heard enough stories of people giving up on the tedious early hours of Majora's Mask that I think the concession to convenience was worth it. The other small change are four fully revamped temple bosses - I won't go into details on those, but they're completely superior to their original incarnations and much more fun.

The Legend of Zelda: Majora's Mask 3D doesn't alleviate the game's major two problems: Busywork and artificial difficulty from the time limit, but those were just a problem for a small fraction of the player base. What it does do is revive a classic, oft-unplayed game in the Zelda franchise and make it imminently more playable. It modernizes the structure of information in Zelda games in ways one can only hope carries forward into new offerings, and though it ignores a tutorial segment, well, we can forgive that.

Bottom Line: Majora's Mask holds up well, and even if it isn't as near-perfect as Ocarina, the comforting improvements make it more than worth your time.

Recommendation: If you haven't played Zelda before, the must-own game on 3DS for you is still Ocarina of Time 3D. Play that first, then come to this one. Everyone else, yeah, buy it.