Development of Dead Island may have been handed off to another developer, but that doesn't mean that Techland is out of the zombie games business. Instead, they're starting fresh with a brand-new IP: Dying Light. Dying Light might not be the next Dead Island, but it does have a lot of the same DNA, and unfortunately, a lot of the same problems.

In Dying Light, you're dropped into the jump boots of Kyle Crane, a contractor sent to the fictional city of Harran. It's been a few months since a strange disease broke out in Harran, and you're on a mission to recover some stolen information. To that end, you parachute in, immediately finding yourself surrounded by hostiles, both living and undead. Ingratiating yourself with the locals means that you need to gain their trust, and that means it's time to do some missions.

Dying Light is a game about avoidance, or at least that's how it's presented. There are zombies, but they can't climb very well. To avoid them, you're going to learn to be an expert at parkour, but don't expect Titanfall / Mirror's Edge wallrunning here. Climbing, jumping, and running are your entire arsenal.

The game's system for parkour is a bit strange. Rather than approach a wall and jump, or leap in the direction you're facing, Dying Light has you look at the ledge you want to grab, and then jump. At first blush this sounds simple enough, but in practice, it's awkward as can be. Since I was reviewing the PS4 build of the game, that meant running with the left stick while trying to turn and orient the camera with the right stick, which was far more difficult than it should have been. Pressing the right shoulder button to jump, I found myself missing the mark and falling far too often. I'm not sure, but I feel certain it would have been much easier with a keyboard and mouse. 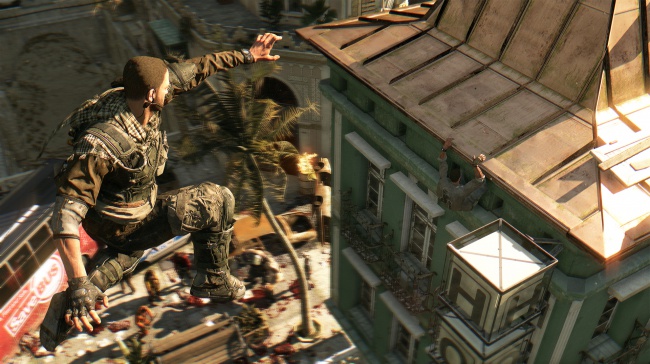 Luckily, falling is not always the end. As long as you're not too high up, you're not dead, you're just stuck dealing with the undead that are just about everywhere. In the resource-starved city of Harran, guns are hard to come by, and ammo is scarce. If you want something reliable for dealing with the zombies, you need to find a melee weapon. Luckily, debris is plentiful, and improvised weapons, like pieces of pipe or lumber, can be found without much trouble. You'll also get help finding gear from the allies you make in town. Most importantly, you can drop kick the zombies. Yes, you can drop kick them into all sorts of hazards, whether it's off the side of a building, into spikes, or into whatever deadly debris is lying nearby. The drop kick is your most potent ally for keeping zombies at arm's length, and you'll use it a ton.

Unfortunately, any weapon you find will start to break down as soon as you begin using it. This is one of the more frustrating parts of the game, as that metal pipe you just grabbed disintegrates after two hits, leaving you with nothing in hand to deal with the now-agitated enemy. You can improve durability as you progress through the game, but the unpredictability of it is definitely a turn-off. Even worse is the stamina meter. Especially early in the game, you get only a few swings with your weapon before you're too winded to fight. It makes little to no sense when your "special-ops guy who just parachuted alone into a zombie-infested city" character is too winded to fight back against the undead monster in your face, and it definitely breaks down the character and the narrative when it happens.