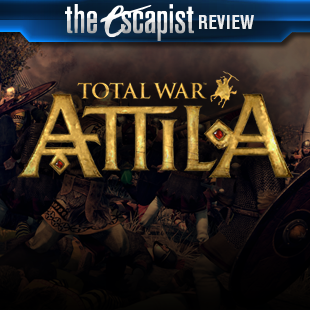 I've been struggling to find a good way to condense my thoughts on Total War: Attila, but I finally struck on an analogy that I'll admit I like for no other reason than it's about tabletop gaming. You see, I think you can find a lot of mirroring between Dungeons and Dragons around the 3rd edition period and the current Total War franchise. With a storied and lauded past, Total War started moving into a new era, and it had a few bumps along the way. The issues weren't anything too major, it was still at its core the game you knew and loved, but it was taking some updates and DLC to get it where you wanted, errata and supplement books. Eventually Creative Assembly would wrap these fixes and features into a definitive Total War: Rome II Emperor Edition, which is where my analogy starts to come off the rails a bit because you had to buy Dungeons and Dragons 3.5 and Emperor Edition was provided free to all current Total War: Rome II owners. What I've been getting at however is that Total War: Attila is basically Pathfinder in this scenario. It's made further improvements on the existing mechanics and systems, but it's still largely the same game and your enjoyment is going to hinge on whether you wanted refinement or would rather have had a departure.

By far, Total War: Attila greatest defining feature and accomplishment is its dog eat dog, kill or be killed setting. Let's face it, you don't make a game starring Attila the Hun where everyone makes friends and wacky hijinks ensue. It's a period of time where the once mighty Roman empire, stretched thin and on the decline, has split into Eastern and Western halves and is beset by enemies on nearly all sides. Even the heartiest factions in the North are being pushed South by increasingly bitter winters, and folks to the East are being harried back towards the Mediterranean by hordes of Huns. Everyone is either fighting for or trying to desperately defend this precious cradle of limited resources. With Attila coming so close on historical heels of Rome II, you might be tempted to dismiss it, but the developers at Creative Assembly have managed to infuse the struggles of this time period into the campaign. There's this immediacy to the setup that few strategy titles have; there are even these great little intro videos that give you a nice primer on your faction's current situation. Where most grand strategy title focus on the slow building up of your glorious empire - which is still here to some degree, Total War: Attila is instead more about burning it all down and this sentiment infuses many of the mechanics. There's even a whole graphic that plays when you raze a settlement of a slowly expanding fire reducing the province to a desolate plain.

As far as the basic gameplay goes, that has remained largely unchanged from previous Total War games. Like other games in the series, Total War: Attila is split between a turn-based strategic map and a real-time tactical battle map. In the strategic map you'll make all the decisions of where to move your armies, what technologies to develop, hire new troops, and what buildings to construct in your settlements, among others. The tactical battles have always been Total War's bread and butter though. I've always found the tactical battles in Total War to have this really interesting dichotomy. On one hand their more ponderous affairs, where your troop placement and force dispositions matter a lot. You want to line up your spearmen against their cavalry and such. At the same time though, there are these split second decisions you'll be faced with that will often tip the balance of the battle. Obviously not every battle is going to be evenly matched if you're playing well on the strategic map, but when you do get into a pitched battle and you're at that breaking points where your line is starting to crumble but you've just committed your cavalry to charge the enemy general is where the brilliance really shines through in Total War: Attila. I've honestly caught myself muttering "hold the line" while playing.

A campaign playthrough will start you off by selecting a faction, each with its own units and traits. The Romans still roll with armies centered around heavily armored and highly trained infantry, while say the Huns or Alans are more focused around their horsemen. There's a lot of fun to be had in simply figuring out the best battle strategies for your faction's forces and its special traits. The faction selection is a bit more limited this time around - though more are coming through DLC, but each one's starting position has a really unique effect on the campaign, making some far more difficult. Some factions like the Romans start with developed starting nations with lots of settlements and armies, but they are quickly attacked and it becomes increasingly hard to defend it all. The game mechanics favors this devastation is subtle ways. For instance, it's almost prohibitively expensive to settle new colonies, making it better to just go attack your neighbors instead. In addition, this attacking heavily mindset is highly favored by Total War: Attila's new twist that some factions will start the game, or at certain points can become, hordes.