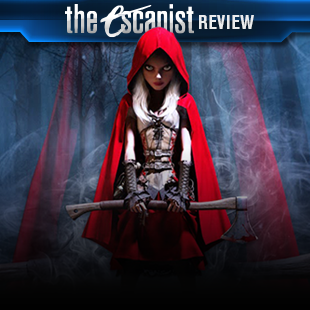 This is no fairy tale. There's nothing fair about it.

Thus begins my journey into the twisted tale of a world gone mad. The city is under occupation by a mechanical army and the forests have become warped with pollution. And who is to blame? None other than B.B. Woolfe, CEO of Woolfe industries. I've never known my mother, and my father was killed in an accident at the factory - or so I was told. Combine that with the multitude of girls mysteriously gone missing, and it is all too much to ignore. Now is the time to leave the sanctuary of my grandmother's home and hunt down the one I hold responsible for my father's death. You can call me Little Red, and this is my story.

Little Red is all grown up in this platforming adventure hack-and-slash. Developed by Belgian developer, GRIN Gamestudio, Woolfe: The Red Hood Diaries is another Kickstarter darling with a success story. Amassing what is by comparison a small sum of $74,139, GRIN went on to develop and release its version of this fairy tale classic. Split-up into two parts, with part 2 set to release later this year, this is a platformer where story is king and part of the challenge is unraveling the mysteries of the dystopian world around you.

A gritty retelling of the Red Riding Hood tale, you take the role of Little Red, an ax-wielding savant determined to unravel the secrets behind her father's death. The world around you is slowly falling apart and Woolfe's army of robotic toy soldiers is keeping everyone in check. But not you.

A platformer centered on story, it is through multiple cut-scenes and constant narration that the story unfolds from the perspective of Little Red as she makes her way closer to her goal. Written in rhyming prose, - with occasional breaks for snark - the game weaves a captivating mystery as players traverses the platforms and puzzles blocking your way. While the commentary is mostly amusing, her tough girl banter can quickly become annoying, and her poetry sometimes feels forced. This is not your grandmother's Red Riding Hood, and she is determined to let you know. Her endless stream of bravado makes her less relatable as a protagonist, and the character ultimately suffers for it.

Regardless of your thoughts on Little Red, you'll be enchanted by the environment. The Red Hood Diaries is nothing short of beautiful. There is a real sense here of staring at interactive artwork, especially towards the end of the game. Reminiscent of American McGee's Alice, each area in the game looks as though it's been touched by a warped sense of fairy tale magic. The city will delight your inner steampunk fan while the twisted forest world is enigmatic in design and gorgeous to look at, with its floating islands of trees and rock. You've definitely fallen through the looking glass.