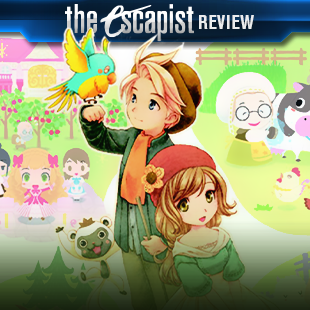 The war of the farming simulator has begun. A scene once dominated by Harvest Moon now has major contenders added to the line-up, and one of Harvest Moon's biggest competitors comes from its own corner. Natsume and Marvelous, the former being responsible for Harvest Moon's western localization and the latter its development since its inception, have split ways due to differing visions for the future of the series. With Natsume owning the Harvest Moon name in western markets, Marvelous has moved on with a new title, Story of Seasons, the next addition to Japan's Bokujō Monogatari series, while Natsume has developed a wholly separate entity under the Harvest Moon name, The Lost Valley.

While Harvest Moon: The Lost Valley returns to simple story-telling, its center focus is world building and customization reminiscent of Minecraft. Story of Seasons, on the other hand, focuses more solidly on resource management and overarching story-telling, as well as building connections to expand your world. Its economic approach to farm building revolves around trade, the relationships you make along the way, and how you manage them. If resource management of all kinds piques your interest more than Minecraft-style world building, Story of Seasons may be the Harvest Moon for you.

Beginning character creation is simplistic, allowing you to make choices for your gender, hair and skin color, and face type. You will also choose your birthday and name. Once those choices are made, the game begins with your first farm. On a chilly winter day, a pamphlet arrives in the mail announcing new farmers are needed in Oak Tree Town. "Help Oak Tree Town grow as you work the land" it claims, and with that, you pack up your belongings to leave the hustle and bustle of city life for the harmonious lifestyle with nature as a farmer. With visions of green pastures and cute animals in your head, a new life awaits you in the countryside.

Your first encounter is with Guild Master Veronica, who manages the day-to-day operations of the town, such as running town events and posting job openings. The guild oversees trading and commerce within the game, which is what you will use to derive profit from all your hard farming work in order to buy items from the General Store. The guild also handles the renting of public fields, allowing you to expand your daily production. Since each rented land parcel is best-suited to growing certain types of crops, as well as crops you can't grow on your own farm, what production it expands will be random.

You are then introduced to Eda, a grandmother figure who allows you to stay with her while your farmland is being prepared. This will be your tutorial to the game. Here, you receive your starting sum of money and a tour of home and farm life. You'll then be immediately set out to collect items around the farm, just to get your inner hoarder's juices flowing. Ultimately, this is a great first start in getting your bearings on what a simple farm looks like and how it's set up. Story of Seasons comes with a robust booklet of instructions, but you can skip it. The tutorial lasts around 2 hours and offers more than adequate instruction to get you prepared.

Once the tutorial period is over, you are set up with your own farm and home within it. Your home acts as your central base, which can be decorated any way you like. That said, there are a few pieces of basic furniture that provide necessary functions that you will use throughout your playthrough. First is your toolbox and storage box, where you can store important tools like hoes and sickles, or collectible items when they are not in use - a hoarder's essentials. Your bed advances time to the next day and restores your stamina and health dependent on how long you sleep. The calendar and bookshelf give you the inside scoop on upcoming holidays, competitions, and birthdays, while the closet holds all your clothes and accessories, allowing you to re-customize your character at any time. No self-respecting city girl would allow a change of seasons without a change of hairstyle, and while you can take the girl out of the city, I know firsthand that you can't take the city out of the girl.

Along the way, you'll meet the town's resident bachelors and bachelorettes. If you think you've escaped another romance mechanic by playing a farming simulator, you'd be wrong. With each bachelor and bachelorette, you can amass the Affection resource, just like with the animals. Once you've gained enough Affection with an individual you can date them, but only one of them at a time, because as the game's instruction booklet proclaims - "This isn't THAT kind of game!" Don't let the handsomely rugged Fritz fool you, that dip in the river "because it's hot outside" is simply a great rural pick-up line. Once you've been dating the same individual for a while and build up enough Affection, you can get married, and even have children.