Developed by Swordtales, Published by Versus Evil, Released on May 14, 2015, Available on PC (reviewed) and PS4. Review copy provide by the publisher. 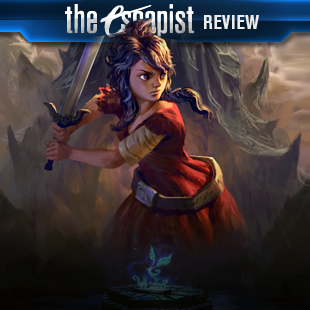 Stories of climbing towers and fighting dragons are as old as stories themselves, so it's only natural to see them in video games. But despite being old hat, Swordtales first game - Toren - has many refreshing additions to the formula. To begin, you're a seemingly ordinary young girl, instead of the typical burly male dragon slayer. Second, thanks to the broken nature of time it doubles as a literal coming-of-age story. And finally, thanks to symbolism and subtle cosmic overtones, Toren's dragon becomes the backdrop for a much bigger story encompassing all of humanity.

On top of that, it certainly doesn't hurt that it's gorgeously designed and beautiful to look at. Not bad at all for a studios first outing.

Toren is named after a mysterious tower where a terrible sin disrupted the usual flow of time. You play as the Moonchild, a young girl destined to end the tower's curse and free humanity. The only problem is that for some reason, the Moonchild's memories were lost, making the nature of Toren and her quest unclear. Guided by the teachings of a deceased wizard, you must guide the Moonchild through Toren to retrieve her memories, confront the powerful dragon seeking to end her life, and help a little sapling grow into a powerful Tree of Life.

There are no shortage of exploration-themed action-adventure games, but Toren has a unique twist. The Moonchild starts the game as a baby, but grows up quickly alongside the Tree of Life thanks to the warped nature of time. As the Moonchild ages, she unlocks new abilities - most importantly the ability to pick up the sword which will defeat the dragon. She also becomes more capable of navigating the Tree of Life's branches, and can access higher regions as it continues to grow. By the time the aging Moonchild climbs Toren, you'll have gathered enough skills and experience to beat the game - and perhaps solved the mystery of what's happening.

It's a great mechanic in theory. This could've been a perfect Metroidvania concept where you unlock new areas based on age, not merely what items you access. But outside of a few solid moments, not much of interest happens here. Since you're always climbing Toren's chambers, you'll always at the precise age you need to be to advance to the next section. Also, the game is so short - about two hours - very few age benchmarks are especially memorable. 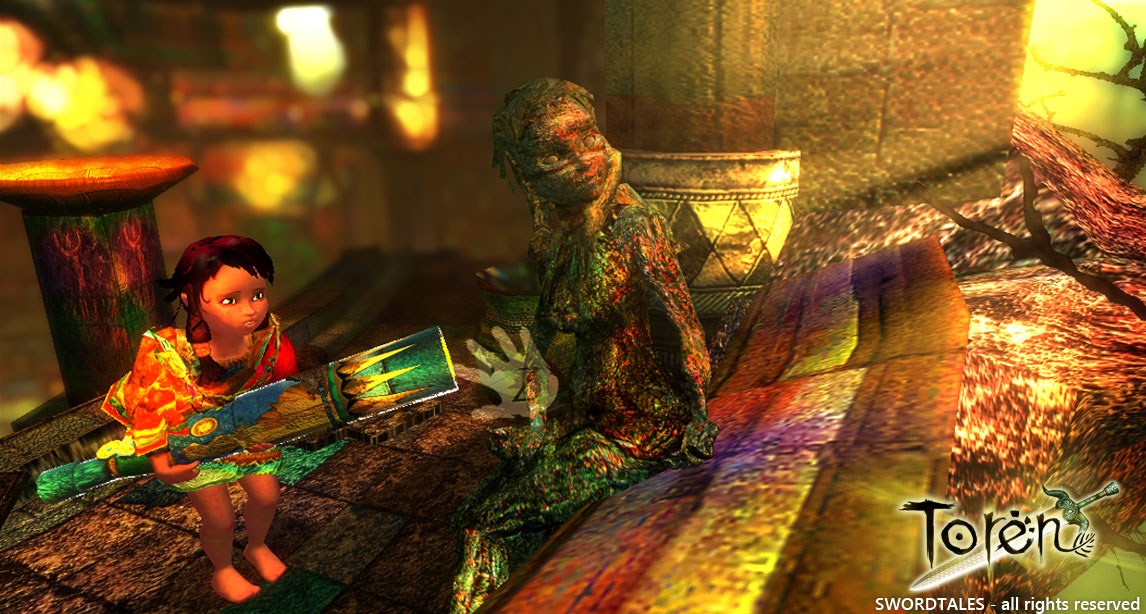 That said, Toren's aging mechanic has its charms. It's just more of a thematic decision than anything else - like when the Moonchild suddenly become a capable teenager, or when you notice the white streaks in her hair near Toren's highest levels. And it's hard to forget the adorably wonderful Baby Moonchild who stumbles her way to an oversized sword. I do wish the concept was more developed, but otherwise it's an interesting diversion.

In fact, theme over mechanics is an apt way of describing the entire game. Toren is heavily steeped in symbolism that's open to interpretation. For example, when the Moonchild "dies", it leaves behind a statue of her last moments that you'll spot upon returning. It's a trippy realization with all kinds of implications - especially since there are other statues scattered around high-risk areas. Is the Moonchild surviving thanks to the bent nature of time? Is something else happening that keeps bringing her back? Who knows! And that doesn't even get into the nature of Toren's curse, the Moonchild's spontaneous aging, or her relationship with a mysterious warrior mentioned in passing.

You'll be rewarded if you stick it out until the end credits - or perhaps you'll end up with even more questions. Toren's story does have an explanation, but not one that sits you down to hash out the details. It's pretty clear the plot has a cosmic scope - you're not called the Moonchild for nothing - but it's incredibly confusing to parse out. Perhaps it's easier if you find all the Moonchild's memories, but as of writing I still have two to locate and can't say for certain.

The good news is it's easy - perhaps even mandatory at a certain point - to just ignore the story and focus on gameplay. Climbing the tower and fighting the dragon is a tried-and-tested model after all. Along the way you'll solve a variety of puzzles, search for hidden memories, and survive the occasional combat encounter. And despite the emphasis on exploration and theme, the game still has unique challenges. The dragon threatens your entire climb, strong winds knock you off your feet, and at one point you need flames to stave off extreme cold.

While these challenges help make the game meaningful, they do tend to be on the easy side. There's usually only a single challenge per tower chamber, with easy-to-find solution that pushes you towards the next section. Sometimes there are incredibly solid platforming sections that make you feel like a nimble fantasy hero, but they're sadly few and far between. Then there are puzzles that are easy to solve, but just take a long time to surpass - like when you're navigating the Abyss maze and have to wait several seconds for lightning flashes to illuminate its puzzles. It's thematically interesting, but drags a little too long to be satisfying.

In the end however, Toren is just well-crafted and engaging enough to draw you into its world - an impressive feat with so few characters - and leaves just enough in the dark to keep you asking questions. You'll be glad Toren doesn't overstay its welcome, but at the same time longing to spend more time in its world. Despite its length, this is a solid first chapter from developer Swordtales, and I for one very much want to see what they make next.

Bottom Line: Toren is a short but sweet game about growing up, climbing towers, and fighting dragons, all shrouded in symbolism and cosmic metaphors. While it has its flaws - including a noticeably limited playtime - it's an incredibly unique outing from Swordtales that's well worth playing.

Recommendation: Toren isn't designed with countless playthroughs in mind, but for $11 it's a perfectly entertaining and thoughtful experience. Check it out.