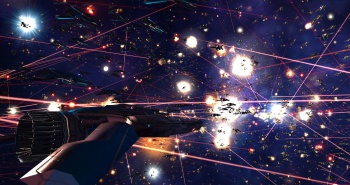 This process of gathering resources and spending them all goes on in the background of a vast maneuvering of fleets and colonizers, explorers and miners. As you expand into the galaxy, you engage in territorial scuffles with other empires, either through war or simply speed, trying to claim the worlds you need to build up your economic tree. Remember, it's all happening in a pausable real time environment, and as you scan space anomalies for bonuses or fight off NPC remnants of past empires, you're not just competing with others but staking a real claim on the galaxy. Fleets are based around a single massive flagship, and you'll rarely have more than ten of those at a time, so even in the larger games you don't have to worry too much about your ability to micromanage an empire. That said, the game basically scales infinitely until your processor melts, so I could see the kind of game where you're building armies of sun-sized battlecruisers and planet destroyers getting out of hand for those not up on their RTS-style micro.

The game has a few different races, as well as race customization for those determined to create or re-create their favorite sci-fi species. They're divided into three tiers, from the basic Terrakin, who interact with the rules precisely as I've told them to you, to second-tier races like plant people who don't build cities or cyborgs that need mainframes to function at peak potential, to third-tier species that break the game rules, from starfarers eschewing the use of planets entirely or full-AI machines having to build their own population. The races use one of a few types of faster-than-light, like hyperdrives that simply speed up the ship from point A to point B or jump gates that go to any other gate in the network - or even beacons that fling nearby ships far away but strand them there without a fast way home. Each of those races has their own ship requirements and types as well, with some having unique mechanics.

The in-game ship builder is fun to fiddle with, but imperfect.You build ships by placing hexes of weapons and systems to customize precisely what you want the ship to do. It's not entirely clear what the purpose of much of the numbers is at the beginning - what's 50 damage per second on the cosmic scale, for example? However, for those not interested in going too far into the details, you can always choose the ship size and type, set some parameters, and the ship randomizer will spit out a serviceable version of what you want. Oh, and, there's no maximum size, so you can just scale the ships up to make bigger and bigger versions of what works as the game bears on. It's a subsystem that clearly has a lot of impact on the game, but realistically only the most serious players will engage with it heavily. Thankfully, there's a social sharing feature, so you can just go grab those players' designs and use them yourself. 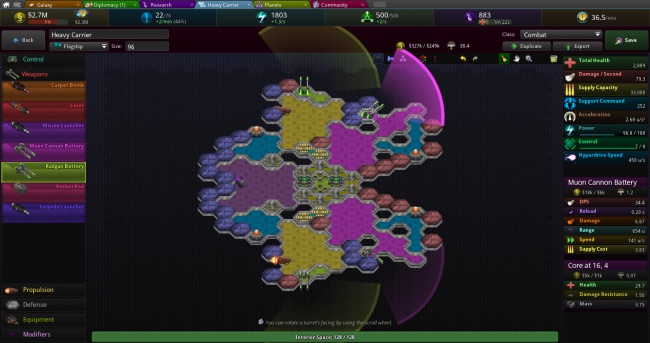 That's not to say that everything in the game is too easy to do. Many numbers will confuse you on their origins, and mousing over, say, income will give you a broad overview, but if you want to figure out precisely what you're spending all that planetary upkeep on you'll have to go to another screen and correlate the numbers. Likewise, some other numbers are completely without tooltips or explanation, and you'll have to experiment to find out what changes them - like many of your planets' stats. Some terms or mechanics, such as your soft 'energy cap,' won't ever be well explained by the game and you'll have to suss out the meaning on your own. Meanwhile, many of the game's basic strategies can only be understood by reading the descriptions of the custom buildings for planets - like realizing you can support worlds by making food and water generators, or how some features of the game (such as terraforming or asteroid mining) are only accessed by right clicking on an object while having a planet selected. These things aren't barriers to casual enjoyment of the game, though they do make the experience of playing significantly less enjoyable because you'll have to teach yourself a lot by trial and error or by reading online forums.

In many ways, Star Ruler 2 reminds me of my love for Dwarf Fortress, or my extended enjoyment of Dominions 4. It is not the most gloriously beautiful game, and it is not the most perfectly polished one, but it is charming and unique and rewards investment back in spades. It will break a strategy gamer out of their long-held beliefs about the genre, and maybe just have enough mysteries to make a neophyte interested in doing something new. As a further note, it's clear the developer is committed to supporting the game, as post-release patches are promised, and one released already removed every complaint I have about the tech tree by updating its graphics and interface. Likewise, that same patch added further customization features for the race editor, allowing more uniqueness for each species. Finally, an in-game IRC channel and wiki access allows players to chat with others for tips or look up a rough outline of how mechanics work.

Recommendation: Space strategy fans would be doing themselves a disservice by not playing this unique diamond in the rough.