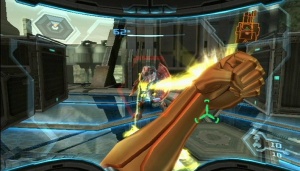 Corruption is so visually stunning, though, that these missteps are easy to overlook. Even running at 480p with the Wii's hardware limitations, it's arguably one of the most visually distinguished games on any platform. Corruption's colorful, exotic environments are increasingly striking, with each more fantastic than the one before. Many recall the mysterious, technologically bizarre realms of the later Myst titles, and all are a thrill to explore.

Samus' enemies are similarly impressive, and they're as smartly modeled as they are animated. There's no denying that Corruption cranks out far fewer polygons and less detailed textures than its next-gen peers, but it doesn't matter. It's gorgeous, and its framerate is butter-smooth. And Corruption isn't just a feast for the eyes. In keeping with Metroid standards, its distinctive audio effects are superb, and lend a remarkable atmosphere the game.

Combat is at the heart of Corruption, and it's the first game to demonstrate the precise pleasure of Wii remote-enabled shooting. Its two control options switch the lock-on and camera tracking functions between something like the traditional Prime setup and a more fluid FPS aimlook scheme. Genre aficionados will undoubtedly debate the issue, but Corruption actually makes a solid case for the Wii remote as the aiming tool of choice for console shooters. It's more intuitive than twin-stick console FPS controls, and arguably more precise. It also makes for far less cumbersome platforming than in the previous Prime games.

There's a clever in-cockpit view of Samus' ship (another first for the series) where the player uses the Wii remote to control her hand as she flicks switches and pushes buttons through story events. She's also equipped with a grapple beam that launches and retracts via nunchuck gestures to tear away blast doors and enemy shields. Some of the other motion-enabled features, like a pull-twist-push method of opening locks, feel awkward and contrived, but for the most part they compliment and add variety to the slick combat controls. 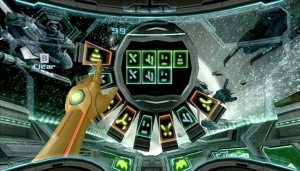 A few other features expand on the Prime formula, like Samus' ability to call her ship forward to specific areas for energy recharges and game save points, and a Phazon-enabled "hypermode" that provides her a devastating short-term firepower boost. You can also use medals obtained via visor scanning to unlock concept art, music, and the like. There's even a quirky WiiConnect24 feature that allows you to swap "friend vouchers" with those on your friends list to obtain especially unusual unlockables, like a tool that allows you to send in-game screenshots to your friends, and bobble-heads with Mii faces attached to Samus bodies.

Corruption's a slightly easier game than its predecessors, at least in terms of combat. Though it's just as cerebral as past Prime games, it's gunplay tends toward a slightly more streamlined, arcade-like feel. The clever, multilayered boss battles that distinguish the series are more impressive than ever, and they're also more enjoyable, owing to the fact you don't have to contend with an awkward control scheme to get the job done.

Corruption is a great game, as likely to please longtime Metroid fans as it is to convert those new to the series. Though it falls slightly short in a few areas, it more than makes good on the promise of its heritage. It also sets the standard for motion control-enabled shooting, and establishes the Wii as a valid platform for future FPS titles. Metroid Prime 3: Corruption is a terrific addition to the Wii's library, and a fitting conclusion to the Prime trilogy.