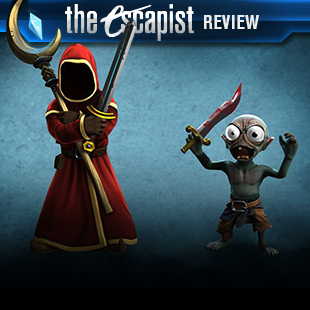 Other than that, Magicka 2's major contribution is Artifacts, objects that alter gameplay in various ways. By default you start out with a Na'vi-style familiar who resurrects a player when all others are killed - a handy feature for solo games - which you can switch out for familiars with additional abilities. Other Artifacts are activated in harder difficulties, increasing Friendly Fire damage or decreasing the player's health somewhat. But the best Artifacts can be found in-game and equipped in custom slots for future playthroughs - included "Sitcom Mode" that adds a laugh track to gruesome deaths, a teleporter that redirects you to enemy kill sites, or "CGA" which downgrades the colors to look like the very first computer displays. There's some enjoyment to be had from Artifacts, but for the most part it's like playing "Big Head Mode" on Goldeneye - sure it's fun, but you're still playing the same game.

Unfortunately, several of Magicka's more frustrating gameplay quirks transitioned to the sequel as well. Encounters can get ridiculously cluttered very quickly, even compared to the action-packed original. It's easy to lose track of where your wizard is on the screen, which matters when a single step sends you off a cliff or into a friend's crosshairs, so Vlad help you if a teammate wears the same color robes as you. And since Magicka 2 has no split-screen option, one wizard walking away from the group drags the entire display with them, obscuring dialogue boxes and enemy positions. It's funny to die because you pressed the wrong button, but it's frustrating when you die and you're not sure how or where it happened.

The UI has been redesigned to help with some of the confusion. Player name slots along the bottom of the screen prominently display your wizard's status - dripping water when you're damp, set ablaze when you've caught fire, or surrounded by skulls upon death. That means even when playing with strangers online, you can quickly see who needs assistance and lend a hand - assuming you don't accidentally make it worse. And while the keyboard/mouse controls are still best for lightning-fast element element casting, the gamepad configuration is much easier to use - assuming you're using the dual-analog standard of course. There's still a learning curve when casting elements with a gamepad, but it's not nearly as finicky or error-prone as before.

On top of that the online experience is vastly improved, prompting fewer dropouts or lag when enemy numbers increase. What's more, if you're logged in with a Paradox Interactive account, Magicka 2 will track your total kills, deaths, friendly fire moments, and self-immolations across your entire career - which is unnecessary but absolutely hilarious. And if you don't care for online play, Magicka 2 fully supports four-player local co-op - and remains one of my favorite couch gaming experiences to date.

At the end of the day Magicka 2 is simply more Magicka, charming little warts and all. It fixes the biggest technical problems of the original, but refuses to change the out-of-control combat and giggle-worthy humor we loved last time. If the combat was just a little more refined and it had a tutorial that didn't rely on text dumps, it would have surpassed the original for me. But as it stands, this is a worthy addition to the series and a welcome game in any wizard's library.

Bottom Line: Magicka 2 is Magicka refined - the same wizard-killing simulator co-op fans love with the fixes and improvements players craved. While it doesn't break new ground or surpass the original, it's a blast to play with friends.

Recommendation: If you loved Magicka, you'll have a deep appreciation for Magicka 2's various fixes. But otherwise, this is practically the same wizard-killing simulator that was released four years ago. Keep that Revive button close-by, and you'll do fine.